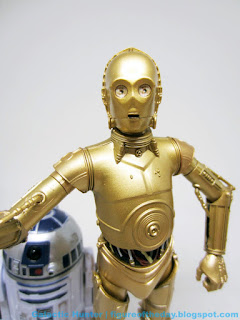 Bio: A fastidious and worry-prone protocol droid, C-3PO longs for peaceful times, but his continued service to the Resistance keeps him in the front lines of galactic conflict. (Taken from the figure's packaging.) 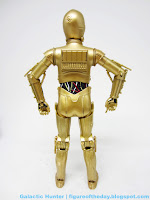 Commentary:  I was pleasantly surprised by this C-3PO - it's better! "Just different enough to be shockingly essential" is not the kind of catchphrase I usually use in this feature. Hasbro actually changed out the arms here, giving C-3PO articulation similar to 4-LOM.  It always irked me that the previous versions of C-3PO had no elbow joints, mostly because they did cram them in the 3 3/4-inch figures from time to time.  There's no excuse with a higher price point and no accessories - and apparently Hasbro agreed this time.

C-3PO is the droid of Theseus that you probably expected.  The body (but not belly), head, and shoulders are the same as all previous 6-inch C-3PO figures.  The belly wiring is the same as the Walgreens/40th Anniversary C-3PO.  The legs are the same as all C-3PO and 4-LOM 6-inch figures.  The arms and hands are the same as 4-LOM.  Hasbro bashed together the best possible C-3PO action figure they could muster out of existing parts, and it even has hands that can do things like hold accessories now!   This gives C-3PO about 25 points of articulation, including the three moving parts around the shoulders.   In terms of construction this is, without a doubt, Hasbro's best-ever C-3PO figure. 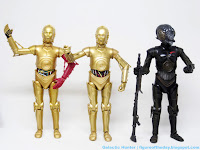 Deco is based on The Last Jedi, which also just happens to be pretty much identical to how C-3PO looks in Revenge of the Sith and the original Kenner line - all gold with no mismatched limbs.  Hasbro did make a 6-Inch Value C-3PO [FOTD #2,418] with this deco, and if you just need a C-3PO at this size with this particular color configuration, it's certainly a cheaper option.   If you want the best of the best, though, go with the Galaxy's Edge figure if you're accepting of a C-3PO with no silver or red limbs.  It's the best all-gold C-3PO you can get from Hasbro in this scale, until they figure out a way to do worthwhile vac-metal gold again.