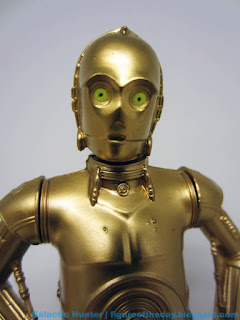 Bio:  C-3PO is a droid programmed for etiquette and protocol built by the heroic Jedi Anakin Skywalker, and a constant companion to astromech R2-D2.(Taken from the figure's packaging.) 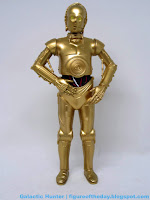 Commentary:  Hey, a new cheap 6-inch C-3PO!  This comes boxed at Walgreens for about seven dollars - a real bargain, in prime condition.   I predicted when I reviewed the first Black Series C-3PO [FOTD #2,323] that "if [Hasbro] did a C-3PO in Hasbro's cheaper 6-inch figure line, you'd probably enjoy that one about as much at 70% cheaper."   I do believe I was right.

When I put this figure side-by-side with Hasbro's 6-inch The Black Series
C-3PO figures, they look almost identical - the wiring in the black belly section is sculpted exactly the same as what we got in Walgreens' exclusive 6-inch The Black Series C-3PO, which was also repackaged for the 40th Anniversary line.  I saw some changes on the side of the knees, but by and large these both seem to have been sculpted from the same reference files.  Most pieces are close to identical to the more expensive, more articulated C-3PO - but this one is sturdier and easier to keep standing.  It's all gold, so it'll be more in line with his look in Revenge of the Sith, the end of The Force Awakens, or The Last Jedi.   If you just need a shelf filler, this is the C-3PO for your fake complete The Black Series shelf. 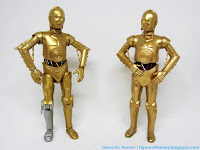 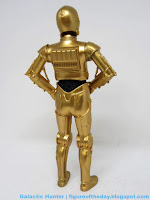 I especially love how it just works.  It's a little different than his sibling, but it keeps the lack of elbow joints.   Cheapo C-3PO has shoulder, neck, and waist joints - and that's it.  He can't sit well, so he won't go into the Landspeeder if you got one.   He will, however, stand easily and look cool.  Now I hope an R2-D2 is coming, and not just because I dream of it being repainted 90 times.   C-3PO has underdecorated palms (usually, there's some black paint there and here they're all gold) plus the wires on his back are unpainted.  You probably won't notice, because the gold coverage is so nice it just looks fantastic.

Rarely do I get to spout out something silly and see it come to fruition, and I'm glad to see my imagination was right.  This is a good figure!  It's cheap and a perfect thing for your desk at work.   If you want a cheap C-3PO figure, this is a god one.  Get it!

Collector's Notes: I got mine from Walgreens.  This assortment's previous waves hit in the USA at Dollar General, Big Lots, and Family Dollar - I do not know if it will be a de facto exclusive at Walgreens.