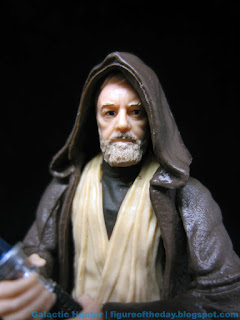 Bio: Obi-Wan Kenobi, later known as Ben Kenobi during his exile, was a Force-sensitive human male Jedi Master who served the Galactic Republic. He was mentor to both Anakin Skywalker and his son, Luke, training them in the ways of the Force.  (Stolen from Wookieepedia.  Packaging has no bio.) 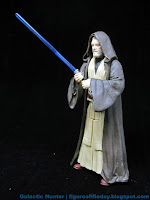 Commentary:  I didn't expect Obi-Wan Kenobi would have been out in September, nor that it would have been this version of him.  I think the last completely new sculpt of him was around 2009, and given the fact we've had so many Revenge of the Sith or Clone Wars takes on him since then, it seemed unlikely.  He's pretty good - he looks better than any Obi-Wan figure we've had in years, but the robes aren't terribly conducive to sitting in a vehicle.  This is a duel figure - and it looks great.  Hasbro could easily retool it with new arms or a different cloak to give you other, more playable figures.  This is basically a good statue figure.

Kenobi has 5 points of articulation, with the split legs which are unnecessary.  He can't sit unless you pop off his arms and remove the cloak - which you can do - but the results are pretty ugly.   Not ugly is the figure's texture, with great cloth-looking bits on the body and the best Alec Guiness likeness I've seen at this scale, ever.   I hope Hasbro tweaks this sculpt to make a Landspeeder-friendly Obi-Wan in the future, because it's great.   Hasbro rarely makes an Obi-Wan figure with a hood sculpted as part of the robes, floating above the head, that looks good and fits right.  They did here.  The lightsaber has a hook for his belt (that doesn't work, it just looks good) and there's enough color in the beard to be excited.

If you have a Force Link adapter, he talks - "Run, Luke, run!" or "Obi-Wan Kenobi..." are just some of the at least 5 quotes among his lightsaber swings.   I'm getting a little sick of people saying their names, but I guess it points to the fact that nearly every significant character in that movie who can identify themselves seems to do so.  Other than Leia, Tarkin, and Darth Vader at least.

Over the years we've seen sculptors struggle to execute a good Obi-Wan with decent proportions.  In 1995, we got a good one but it had problems standing.  In 1998, we got a good one with some decent joints, but it was a little bulky.   The Vintage 2004 one had a few thin joints, wonky elbows, and what I would generously refer to as a noble attempt at cloth robes.  This one is better, cheaper, and just looks great.  The flare-free lightsaber with the hook and painted hilt is surprisingly nice, and having a figure like this in my hand raises the bar for retro remakes or classic characters.   We didn't get any new classic pre-Disney sculpts for the last couple of rounds, so seeing this time's efforts - a decent Vader, an OK Han, a really nice Boba Fett, and the Kenobi to die for - I've got hope for the future.  I want to see what else we might get.

Collector's Notes: I got mine from Walmart, and I was surprised to see it.