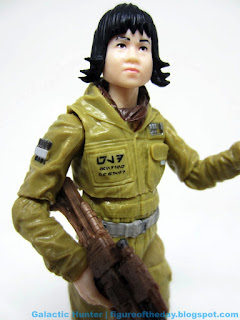 Bio: Part of the support crew that keeps the Resistance starfighters flying, Rose  has hated the First Order since she was a child.   Now able to fight back against the enemy, Rose keeps her focus on her mission.  (Taken from the figure's packaging.) 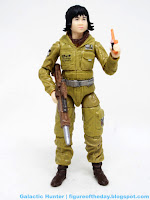 Commentary:  I don't know much about Resistance Tech Rose other than she was said to be a Finn love interest in an early casting thing and she's also the sister of Paige (sold separately.)  I thought "Oh please, just because they're both Vietnamese and in the Resistance doesn't mean they're sisters" but research shows I'm an idiot and they're sisters.

For those of you who follow the Fifteen Commandments ("Thou Shall Not Squint," thanks Mel) it's hard to read her suit.  It said "GLD" which apparently is Ground Logistics Division.   What she fixes specifically we don't know, but she looks like the ground crew in  The Force Awakens.  I think it also says "Landing Officer" but you try to read type that small - an impressive feat for Hasbro to reproduce on such a small figure. 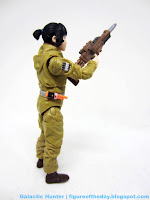 There are numerous layers of costume here, like an undershirt and a belt.   It's a start.  You can see a lot of texture here with tons of wrinkles and the signs of action, plus various painted silver details on her pockets and such.   They didn't skimp on detail here too much, minus the one-color shoes which is basically normal these days.  (Painted soles?  Insanity.)  Thanks to the not-too-ornate costume and excellent articulation, you can give her tons of personality.  Also, it seems Aurebesh only comes in one font which is pretty disappointing when you consider how many flavors our alphabet come in.

I really like this figure - it makes use of the hip joints, thigh swivels, and even has a controller of some sort that can clip to her belt. I love the face sculpt, the hair looks surprisingly great, and there are little patches, buttons, and other greeblies on her suit.  She even has a hood on the back!   They painted the barrel of her gun!   And that little accessory, whatever it is, may be important since the standard and fancy 3 3/4-inch figures both have it.