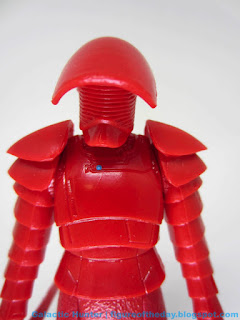 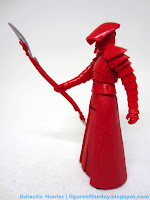 Commentary:  According the greater licensed product line, it looks like there are multiple ways to do the Elite Praetorian Guard thanks to weapon and helmet variations.  I was at Target and saw a cut-out with a sword that, at the angle presented, looks like a collapsed umbrella.  (This hasn't made it to Hasbro's toys yet.)   This version of the figure is interesting because it has a visor over its visor - but is fundamentally similar to the version we looked at last week.

It's worth noting this figure - with its awning visor - was made in Vietnam, while the other was in China.  The actual look and sculpt of the figure is pretty much identical, coming from the same digital files but different tooling.  If you examine their feet, there are minor differences in the placement of the Force Link logo as well as the specifics of the text.  As such, they're  not the same figure - but they seem to make similar if not identical combat sounds with the Force Link band.  Boooring.   The figure has exactly the same articulation as his partner, and the sculpting has no obvious differences. 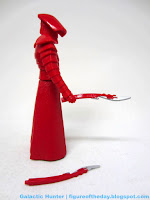 The helmet is striking in that it departs from the other one.  I still don't love it, but I appreciate the changes just to mix it up a bit.  I collect things, so having one with a less ornate helmet mixes up my displays.   You'll note that this guardsman has a large visor over his helmet, perhaps a blast shield, and the helmet itself is strikingly different.  The back of the helmet has different details.  It has the chin/fave area similar to a First Order Stormtrooper or Phasma.  I'm still not sure if he can see through that thing. 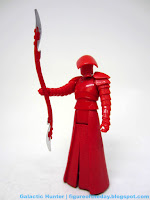 I appreciate the figure's accessory, which may constitute a minor spoiler.  It splits apart in the middle, giving you two bladed sword weapons if you are so inclined.  Does it split for combat?   Does it get damaged by Rey's lightsaber?  Do these two even share a frame of the film?     It's hard to say, especially as we've seen how much things can be changed at the eleventh hour in the editing room after Rogue One.   For the discriminating troop builder, this is a worthwhile set - but take note, the Rey figure is extraordinarily similar to (but not identical) its individually-packaged counterpart.   I'd suggest getting this 2-pack over the single figure to maximize your trooper and minimize your duplicate Jedi trainees.

Assortment Notes: The 2015 line gave us a couple of weird plussed-up figure packs - one was "Armor Up" figures, a basic figure with a helmet for an added $5 upcharge.  The other was a Deluxe 2-pack, which gave us two figures with normal accessories plus rocket launchers and big weapons for about the price of two regular figures.  This movie's two-packs are somewhere in the middle - you get 2 figures for $15, which is good.  The bonus accessory isn't as neat as what we got for Rogue One (giant rocket launchers) but are about as sensible as what we got for The Force Awakens - only we get a secondary sound chip instead of an action feature.  Minus things like duplicate figures you might not want, these are a decent value.