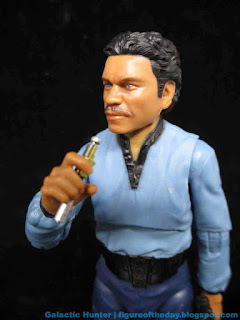 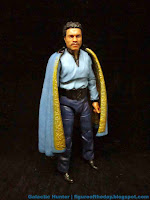 Commentary: This Lando Calrissian is a redeco of a really good 2017 release.  The Lando Calrissian [FOTD #2,379] had the same gear, and the same better-than-average elbow articulation, however the face was just pretty good.  For the time I'd say it was a better example of what Hasbro could do pre-printed faces, and by comparison it's always amazing to see just how much better these things get over the years.

2020 Lando has the same 26 (I think) points of articulation, with the bend-and-swivel wrists, rocker ankles, black belt, and what must be a prototype iWatch on his right wrist.   He has no problems standing, and the cape is pretty much the same as last time too.   So why are you buying it?  The packaging, and the portrait.

While I very much liked the 2017 release of Lando Calrissian, I can't deny that his face has what appears to be an exaggerated pair of eyebrows to go with his mustache.  It's closer to a Groucho interpretation, and usually smaller faces need exaggerated details to show up.  The difference is night and day when you look at the 2020 version with thinner eyebrows, a more muted mustache, and eyes that don't "pop" quite so much.   At first glance it's a radical departure, but after a few moments this is the clear winner. 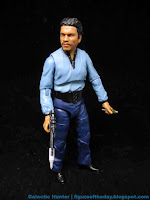 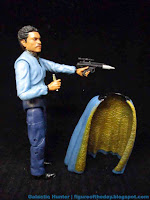 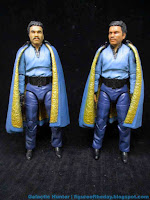 This figure is almost good enough for the ages - unfortunately, that 2017 mid-torso joint looked bad then and worse now.  Waist joints at the belt always look great, even if it doesn't give the figure quite the same mobility.  A big cut in the middle of the shirt just looks dreadful.   Hasbro generally doesn't invest in new parts for a redeco wave, though, so you'll have to enjoy the blaster, cape, and torso that you got.  Maybe Hasbro will try again for the 50th anniversary - but for now, this is a worthwhile upgrade.  Even if you just leave it in the packaging, it's good.   Score one if you're so inclined!