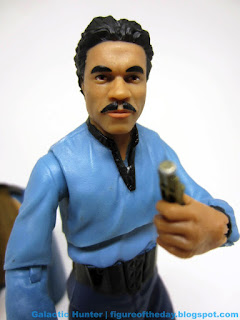 Bio:  Once a smooth-talking smuggler, Lando Calrissian changed from a get-rich-quick schemer to a selfless leader in the fight against the Empire. (Taken from the figure's packaging.) 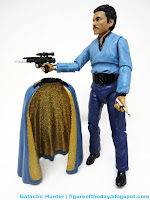 Commentary:  I'm really glad we got Lando Calrissian already - although I'm somewhat surprised they didn't just wait for the Han Solo movie.   Based on his most famous costume, Lando Calrissian has a rubbery plastic cape, his communicator, and a blaster.  His blaster is famous as an update of the original Kenner figure's weapon, and it's also in many publicity stills.  I'm not sure where it actually appears in the movie though, now that I think of it, but maybe I'm just getting old.  It's painted and looks just like any decent Rebel blaster.

He also has his intercom commlink/communicator - it fits in his hands perfectly, with a golden top part and a silver bit underneath.  His left thumb is molded perfectly to hold it, so kudos to Hasbro on that and keep in mind he has no on-figure storage for this accessory - take care to not lose it.  Of course, what you want to know about is the cape - it smells of rubbery plastic, and the sculpted lining is quite nice.   The deco doesn't quite match the actual costume's lining, so the interior really gives you more of an impression of the material rather than an exact match.  It hangs over his shoulders nicely, with the black collar and blue exterior. It hangs well.  It's sculpted nicely.   I'd be hesitant to say that it would be possible to make a better cape given the cost of the figure and the minimal chance of them ever reusing this piece on another toy. 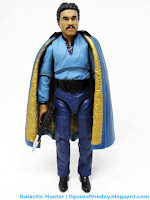 The figure is no slouch with at least 26 points of articulation.  I'm not super keen on the eyesore torso joint (rather than articulating the figure at the belt), mostly because he can't do much ab crunching.  The forward/backward motion is minimal at best, so the ability to swivel to the sides just makes it look wonky.   The arms and legs move well, though, and look mostly fantastic.  My sample had some weird white rough patches on the pants, for reasons I don't entirely understand.  The cut on the hips gives the figure a good range of motion, but the silhouette is a little diaper-esque.  But at least he can assume a number of really cool action poses, thanks to the rocker ankles, double-knees, and everything else.

I love how the head turned out, especially as the eyes and mustache all seem painted on straight on my sample.  The eyes have a bit of gloss on them too, so that's an added bonus.  The hair is great, the sideburns are good, and the costume is pretty uniform.  BUT - there's a super cool wrist communicator with painted lights on his right wrist! That's awesome.  Nicely done, Hasbro.

So - it's pretty good.  I don't like the torso, but everything else turned out pretty well.  I hope to see a "Vintage" package variant some day, but I'm not holding my breath.  It would have been stupendous to have a stormtrooper blaster thrown in for good measure, but I'm very happy that they gave him the microphone.   For $20-$25, you're going to like it.   Maybe even $30.  I assume it might be a while before we get another 6-inch Lando figure based on Billy Dee Williams, but maybe Hasbro will surprise us in the next couple of years.  And hopefully we'll see him pop up in one of the sequels.