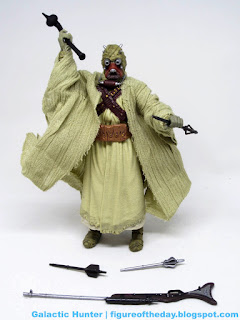 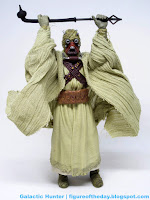 Commentary:  I always want to be impressed or surprised, and this new Tusken Raider delivers.  I think the last new version of the figure was possibly almost ten years ago, so this 6-inch debut is a long-awaited step in a new direction.  The last "vintage" version, you'll recall, had only swivel elbows.  This one has real elbows, rocker ankles, bend-and-swivel wrists, and a customizable gaderffi stick.   You can pluck out the bottom, pointy part and swap in one that looks like the classic movie/Kenner version and two other ones I am mildly ashamed to admit I do not immediately recognize.   I love that they gave fans an options like this for army building (or just for variety's sake), allowing you to have up to four differently equipped raiders from just one figure with no modifications needed.  This  is a good thing. 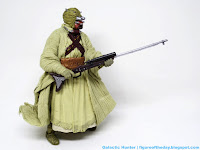 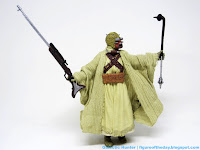 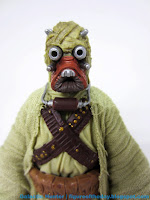 The hands are sculpted as well as most others, allowing him to hold a rifle or the gaffi stick with both hands.   The mixed media figure is a decent one, with a cloth skirt inhibiting movement of the legs (boo) but cloth robes over it so it looks good (yayy).  It's a functional release, but it would have been awesome if they could have allowed for more leg movement - as it is, it's a gorgeous figure with decent functioning legs.  I love how the bottom of the robes are clearly multiple layers, with a tattered, dirtier outer layer complete with extra grime and frayed edges.  That's really the tops.

The sculped texture feels fantastic, and the factory picked some really great fabric for the outer robes.  If you like fondling your figures, you're going to like this one.  The head wrappings are similarly fantastic, and hte head sculpt is exactly what it should be - a pile of garbage.  Metal bits horns, and the weird let's say mouth are represented perfectly, as are the pouches on his belt with all the little buttons and/or snaps.  It's a gorgeous figure. 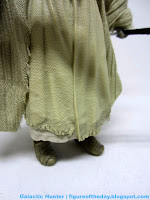 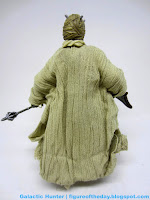 Available in standard The Black Series or 40th Anniversary faux-vintage packaging, Hasbro gave fans plenty of options with this one.  You can display it, or keep it packaged any way you want.   I'd love to have had more leg movement but I can't have everything.  It's good, get one if you can - get more than one if you're feeling greedy.

The other two variant tips for the Gaffi stick are the ones that the other two sandpeople had. There were three in the film total.