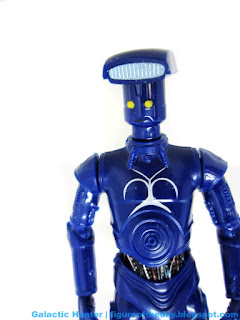 Bio: A vendor droid, also known as a shopkeeper droid, was a type of droid assigned to sell merchandise.   (Stolen from Wookieepedia.) 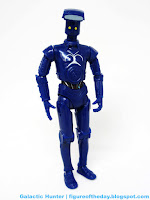 Commentary:  Here we go again.  Misery for collectors tastes like Disney, because the Vendor Droid is exclusive to their theme parks and is sold in pieces.  The pieces you need to build it may not be available on a specific day - a pal of mine helped me out, but I also got a fair amount of mismatched droids due to availability... so I need more parts.   And I'm very fortunate - otherwise fans have to resort to a massive vacation to get them, or bribes, or eBay.   The basic body of the model we're looking at today is C-3PO with new colors and a new head.

While similar to Hasbro's build-a-droid molds, it's a little different.  The feet read "CHINA" and "©LFL", with no year or Hasbro markings.   He has 20 points of articulation if you count generously, and why shouldn't you?  This kind of droid debuted in the CG The Clone Wars animated series, so these mark its first "realistic" action figures - and first figures of any kind.  On the show they were frequently green and striped, but this one is dark blue with vintage hot rod pinstriping on his chest for some reason.  Maybe there's a story here, but I can't tell you what it is - maybe this is a hint about something in the future Star Warsland park that will open eventually.   The figure's ability to stand and sit are worthy of praise, although I'm increasingly ambivalent about how the action figure world is packed with incompatible styles.  This may be "old man" though, as back when I was a kid there were 3 distinct scales of action figures from Kenner and all of them were compatible within their own lines.   Well, maybe not the Ewoks cartoon figures, but that's OK.  Today, the 3 3/4-inch format not only has cartoon formats, but multiple ones.  The Clone Wars figures are a mix of "real" and "animated" figures, but at least Hasbro has given us a consistent 6-inch The Black Series line.

What make each of the figures we'll look at here distinctive is the head.   Here, a peg goes in to the body and swivels around.   A can-shaped head has two piercing yellow eyes and an unpainted mouth slit, plus a hat that looks like a flood light of some sort.  Maybe it's a price scanner.  I actually don't know - but it's distinctive, and the blue chest marker looks a lot like some sort of Hutt crime tattoo.  The dark color absorbs a lot of the detail, but it's still sharp.  The can itself is a little light on markings, but the body has a ton of bits and pieces thanks to the various limbs and body parts being recycled protocol droids like C-3PO and 4-LOM.

Because Hasbro hasn't distributed a single Vendor Droid in any of its lines in any scale, you need to get one of these guys from a Disney park.  I don't think they've made any show-specific droids yet, but you have blue, red, silver, white, black, and gold flavors for your droid enjoyment.   They fit right in with your Hasbro collection, which is simultaneously great and infuriating.   At least it exists, and you have options.

The body of this particular droid belongs to what they call "The Senate Droid", a 3P0 appearing in season one of Clone Wars. The complete look would include the blue 3P0 head from this BAD set.

His R5 companion was included in the Clone Wars 4-pack released in April.