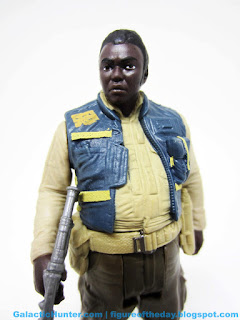 Bio: A platoon leader in the Alliance SpecForces, Sefla is eager for action.  A strong, capable soldier,  Sefla has a lot of heart be brings to the fight against the Empire.  (Taken from the figure's packaging.) 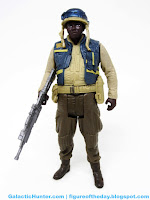 Commentary:  As I'm in the business, I see stuff early.  I didn't see Lieutenant Sefla (the figure) early but sometimes names show up and I had to ask "Who the heck is that?"   Raddus' name and Galen Erso were known entities, but prior to the movie nobody knew who Sefla was.   I eventually found a blurb confirming the actor who was cast in the role, but that didn't help things.  I saw the movie, and that didn't help things either.   This is a nifty, distinctive Rebel trooper - but why this one?  Galen Erso is a pivotal character portrayed by a well-known character actor.   Admiral Raddus steals the show.   Sefla, I'm not 100% sure I could point out in the movie without a freeze-frame.  Mercifully Hasbro delivered a pretty good figure for us to puzzle over, assuming you can find him online to buy somewhere.

As with most recent figures, Sefla has 5 points of articulation including a ball-jointed neck.  What's a real treat is his helmet - it's removable!    It looks like a high-tech version of something the US forces might have used during Vietnam, mixed with elements of the helmets we saw on Endor from Return of the Jedi.  The straps hang down nicely, with painted green and grey bits bringing it to life.    His head sculpt looks like the pictures you'll see in guide books, with a blaster unpainted to match. 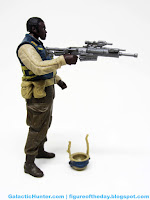 I'm stunned that while Raddus was hollow (and I have touched the sky), Sefla is actually solid plastic in his torso.  This gives him a little more heft, which is a curious choice given he's a little rounder than most figures.  I like that the colors of his uniform have a familiar vibe, even if he could stand to have more and brighter paint applications.  It's the only Sefla I assume we'll ever get, so at least I can say I'm happy he can stand up and hold his gun.  His legs also swing forward far enough that he should fit in many vehicles without much of a fight - a huge plus. 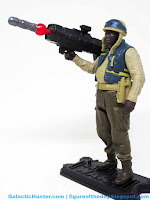 I'm even more surprised that his bazooka is cool.  The design is marvelous - the plastic projectile is a grey rocket, with a red explosion trailing out from behind it.  The launcher itself looks good, with some nice deco.  Brilliant!   Unfortunately it's too heavy for him to balance it, and the shoulder covering part doesn't necessarily stay in place.   I don't love the execution, but the thought process put in to making this particular accessory has me giddy.  Hasbro actually exploited the safety requirements for its bazooka projectile to make something that would be even cooler than just a small firing rocket designed to choke children ca. 1978.

Sefla's a good modern Hasbro figure.  It's not the best ever, but we're fortunate that we got this new character instead of yet another retread of someone we already purchased.   The sculpting is good, the deco is mostly on the spot, and he's a display stand away from being everything he should.  If you have the means, get one.  Also if you ever hear why we got him instead of somebody else, I'd be curious to know.  He's not bad - far from it - I'm always just a little bewildered when someone like a Ric Olie gets a figure that must have been in development before the final cut of the film.  The rumor (fact?) was that the performance for Ric Olie wasn't good enough for the final cut, and I can only assume Sefla was surgically edited out after the reshoots.  But I don't know this - I do know he turned out well enough to make me happy that he exists.

There's a scene in the novelization of Rogue One between Sefla & Jyn on board the U-wing when they're in route to Scariff. They have a short conversation and he bestows upon her the rank of Sergeant. Curious to know if that was ever shot for the movie or not. At least it explains why her figure is know as Sgt. Jyn Erso.