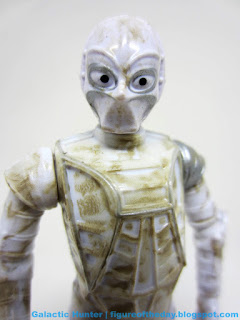 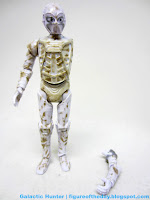 Commentary:  This one might look familiar. The White CZ Series Communication Droid is a droid that appeared in two films with two different names, but the same suit was supposedly used with minimal (or no) modifications.   A CZ-4 action figure came out in 2007, and this one looks a lot like it - but it also looks like reference photos of CZ-3 (from Mos Eisley) and CZ-1 (from the Sandcrawler) from the original Star Wars.  And it could stand in for CZ-4 in a pinch, of course.

The figure you see here has specific arms, as well as a head and body.  The legs are the same as C-3PO, and the dusty deco is also the same as the white protocol droid.  Articulation is just fine, with 20 points of articulation.   I love the sculpted detail, although the glossy white plastic isn't exactly what I would have pictured for this generally dusty and worn robot.   Disney's crew did a pretty good job getting the major paint details right, such as the dirty deco, the silver shoulder, and the dots in the eyes.  The wipes weren't quite handled to match the movie, but you get the idea of who this is - and we all need droids to fill out shelves. 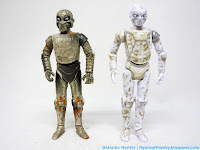 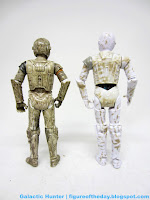 It's worth noting that this isn't the CZ-4 mold.  That Hasbro figure splits at the waist, presumably by design, while this one pops apart at the neck/shoulders/hips.   You can indeed throw parts around a Sandcrawler - and you're probably going to see a big Sandcrawler again soon - so you should probably snag this one.   If you're happy with CZ-4 (and have a few of him) you're all set, but this one is certainly welcome to add to the seemingly unending droid hordes.   It's worth the asking price, although the trip and the wait in line may not necessarily be worth the potential exhaustion and emotional turmoil.

I just took the TAC version of this guy and use a little goof off and voila: white tatooine version