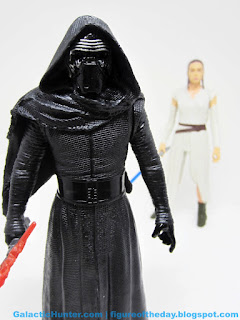 Bio:  A dark warrior strong with the Force, Kylo Ren commands First Order missions with a temper as fiery as his unconventional lightsaber.  (Taken from the figure's packaging.) 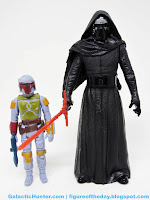 Commentary:  It seems Kylo Ren sells well.  This particular version hasn't been offered in the USA as of yet, it's a 6-inch tall figure with jointed arms and a moving waist.  The neck is a separate joint too, but the hood hangs over his back preventing movement.   Thanks to his distinctive build the figure is a bit hollow - and I do mean that literally - but he stands without any fuss and can hold his lightsaber.  Too bad you're going to have to go overseas or do lots of networking to find one, as it scarcely shows up on the electronic bay or online toy sellers since most people aren't even aware it exists. 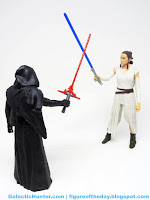 This take on Ben Solo seems to be derived from Kylo Ren [FOTD #2,229] from 2015, with some similar details in how the robes are positioned - particularly around the feet - with with tweaks to the hands and deco.  The tattered hood/cape is still here, as is the distinctive mask.  His belt buckle is left unpainted, but glossy black paint was added to the boots, gloves, belt, and helmet to add a little more "oomph" to the otherwise one-color figure.  I'm actually kind of annoyed they left the belt buckle unpainted... not because we probably wouldn't miss it, because it's pretty much the only thing left to do to make this figure almost perfect (for what it is.)

The whole cloaked Darth mummy thing works pretty well here as it usually does, with the crossguard lightsaber fitting perfectly in his hand and, if you ask me, looking better than most other of Hasbro's takes on the weapon as an action figure accessory.  The energy spills out of the emitters, and even though the hilt is only painted one shade of grey it still looks superb.     I just wish you could turn his head. 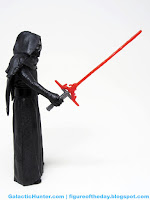 For six bones, it's magnificent.  For ten dollars, you could just as easily get the 12-inch figure.  For more than that, odds are you'd be better served getting a big Jakks Pacific figure or Hasbro's The Black Series release - especially if the latter is on markdown still somewhere near you.   Were this at Big Lots! near you right now, I'd say run out and buy yourself one because it's cheap, sizable, and would look great as a work decoration.  Especially because at $6, if it gets stolen,  you wouldn't freak out - but it's not $6, it's a scarce international collectible now.   I'm glad I got mine, and I hope Hasbro continues to pump these out, slowly, over the coming years.