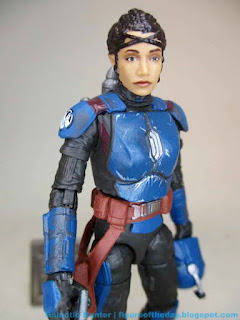 
Bio: A master of hand-to-hand combat, Koska Reeves is loyal to Bo-Katan and is a member of a band of Clan Kryze Mandalorians striking back at the Imperial remnant. (Stolen from Target. There is no bio on-pack.) 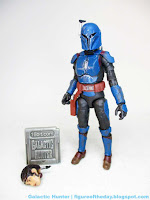 Commentary: Unless Hasbro cranks out a Kenner-style version, this Koska Reeves is a shoo-in for my favorite version of her so far. She's basically similar in deco to The Black Series, but with the engineering of a good The Vintage Collection figure - specifically, Bo-Katan Kryze [FOTD #2,893]. While many of Hasbro's recent high-priced old-mold repaints have been feeling more and more like we're being squeezed on the line's way out, Ms. Reeves is pretty much as good as we can expect. Not perfect, but at least worth the asking price. 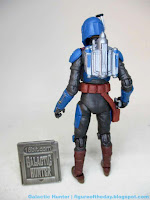 Koska Reeves mostly shares parts, but there's a new head and a new belt. Given that the figure is based on a character whose armor comes from a mold, this is more or less exactly what I would expect and want. The same awesome leg articulation is still here. You still have the superior elbow joints, the surprisingly dainty-yet-good ankles and wrists, and the double-jointed neck to get even more great poses out of a surprisingly lifelike pea-sized head. You get one blaster that fits in a holster, and the helmet is a swappable head - so there's no worry of it being too big, or rubbing the paint off of her face. I am still living that we're being charged $23 for a Boba Fett repaint, but this repaint/remold at $14 takes something good and changes it enough to be different, yet worthwhile, while not making me feel like a chump for having bought it. 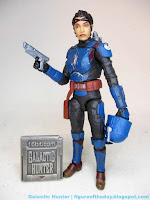 Her armor deco paints the blue on the chest, rather than molding it in blue, and the results are hugely better. It looks like painted metal, complete with scuffs and scrapes. Her other armor follows suit, being similar to the 6-inch figure yet somehow looking better at the small size due to how it was painted. I have no complaints, except the Night Owls logos on the shoulders are still a little ugly. The same was true of Bo-Katan, so I assume this process still has some refinements. Thankfully you're unlikely to see them, but at least everything else is excellent. Her eyes are great, the hair looks good, the details are almost all exactly where they should be. Given recent weird price spikes, there's no excuse for anything to be subpar, and she's great. I wish there were more vehicles for her or maybe flame accessories, but at $14 I wouldn't expect any given Hasbro's higher-priced action figures relative to the competition in the marketplace.

I think she's worth it, and she went to clearance almost immediately - in under two months you could get her for about five bucks. It's a pity because this is a very good figure, but between Target's impatience and Hasbro's floating (or non-existing) release dates on exclusives, it is what it is. At $14 I'd say she's going to give you your money's worth, so grab one if you see her. I think this figure would have done better business had Hasbro kept pushing it to season 3 of The Mandalorian, but we'll see how that goes next year.