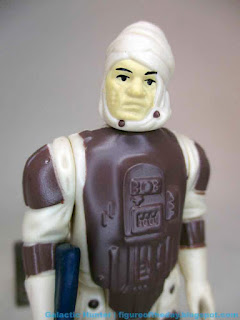 Bio: Dengar is an effective bounty hunter preferring firepower and destruction to finesse and style. And IG-88 is a chrome war droid turned bounty hunter who answered the call to capture the Millennium Falcon. (Taken from the figure's outer packaging.) 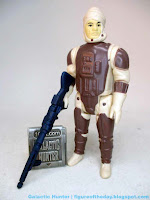 Commentary: A nice quality figure that may cost you more than an actual original from 1981! Right up until I opened Dengar I was planning on panning him for using a faded face color, which a lot of the old Kenner figures had. Some Dengar figures have a peachier-colored flesh face, and another is pretty darned yellowed. The 2022 one is somewhere in between. It's definitely not as glossy, and it lacks the sculpted detail of the originals, but it's a pretty decent overall update of a figure that you could buy a 40-year-old sample of on eBay for under $10 with no blaster and under $20 with a blaster. It isn't mint, but the genuine article can be had for less than an Amazon reissue. People sell "lots" of the Bounty Hunters with and without weapons pretty cheaply too. My main interest in this Dengar is as a new object, but he can grip his blaster much better than my original Dengars ever could. For that reason, Dengar 2002 is arguably worthwhile.

A lot of the retro reissues look perfect but feel a little off. Dengar looks a little off but feels perfect. The depth of sculpted detail seen on the original is gone, so wrinkles and scars and other elements are pushed up a tiny bit. The right shoulder folds have vanished, and some of the deep cuts aren't so deep anymore. There's a box of buttons on the chest armor, but the 2022 figure looks more like a boxy mouth with teeth - the buttons aren't separated from the border like the 1981 figure. Details on the original figure are much crisper and, for lack of a better term, full of life. You can almost see where the stylus probably nudged the wax, whereas the 2022 figure looks a little rounded-off. If you told me this was a cleaned-up 3D print of a 3D scan of an original figure, I'd believe you - it almost looks like we're seeing some sculpted generation loss from a copy of a copy. This isn't to say it isn't good. At a glance, the silhouette is the same and everything is basically where it should be. Any toy getting released a few years (let alone four decades) after the original is going to have a few changes, so the face being not quite like either of my original Dengars is no big deal. Had Kenner kept this figure in production for 40 years I have no doubt the head would have worn out and needed to be replaced a few times. 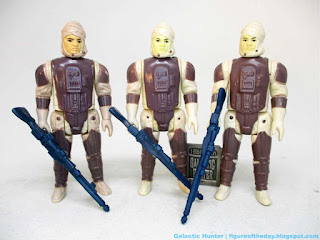 The figure absolutely feels like an old figure. There's nothing fragile about him, each joint is sturdy and everything moves smoothly with nothing sticking. I picked up the figure and swing the limbs forward to cram him in a mini-rig, and absolutely everything feels like a fresh 1980s figure. The original figure had shinier paint and shinier plastic. Everything is certainly close enough that if you didn't grow up with these toys in your toy box, you would be unlikely to notice a big difference. The left hand still rubs against his leg when you swing the arm down, and the backpack and back of the figure seem to have slightly sharper detail than the front. How odd. The sculpted copyrights on the legs are also a little strange - "2022 LFL VIETNAM" is incredibly soft and hard to make out, but "HASBRO SA" on the other leg is super sharp. Why? I have no idea.

The blaster looks almost exactly like the original, with slightly less sharp detailing and a less-glossy plastic. If you don't have an original to compare it to, you'd probably confuse it for an original. It's very good. One of my favorite things about the figure is the retooled right hand, so his blaster can be held facing forward without any weirdness - it's a perfect fit. It's a good quality-of-life improvement, something Han and Leia didn't get in their 2019 reissues.

Of all of the figures Hasbro brought back from the dead, this is one of the better ones. It does a good job improving on the original while also combining parts of existing variants to make something that's close to how you may have remembered Dengar. It also highlights a problem. Hasbro has been marking up its exclusives by a couple of bucks, so this $10-$12 reissue is $14 (in a $27.99 2-pack) as sort of an unspoken "exclusive tax" which we've been seeing a lot more as of late. You can get an authentic original Dengar with blaster on eBay for under $10 shipped if it's a little played-with. What would you rather have - a mint replica, or a played-with piece of toy history at a lower price? Hasbro should probably reconsider its price point for these figures because $14 is a little ridiculous when similarly sized figures from its competitors have more gear and more articulation at a sliver of the price, and they even have other figures that are similarly constructed at lower prices. If the price drops, this is a great quality figure. It's just a little hard to justify when the genuine article (or competing products) can be had for a much lower price.

Collector's Notes: I got mine at Amazon. It was supposed to be released today (December 1, 2022) but arrived about three weeks early.

Email ThisBlogThis!Share to TwitterShare to FacebookShare to Pinterest
Labels: Bounty Hunters, Dengar, Exclusive, The Empire Strikes Back, The Retro Collection