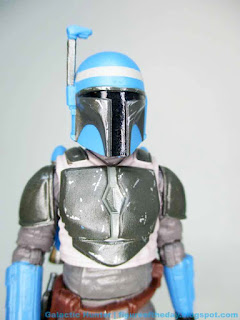 AXE WOVES Target Exclusive
The Vintage Collection 3 3/4-Inch Action Figure
Item No.: No. F5566
Manufacturer: Hasbro
Number: #228
Includes: Helmet, blaster
Action Feature: Removable helmet, holster
Retail: $13.99
Availability: September 2022
Appearances: The Mandalorian
Bio: A skilled warrior, Axe Woves is loyal to Bo-Katan and is a member of a band of Clan Kryze Mandalorians striking back at the Imperial remnant (Stolen from Target. There is no bio on-pack.) 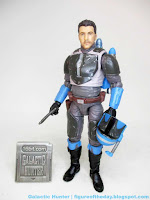 Commentary: Not yet on clearance, but abundant, this Axe Woves is pretty much the most sensible exclusive, distributed well, and sold at what is a pretty fair price. It was $14 and came out about a month before pre-orders for Vintage hit $17.99 - but just after his capsule companions Migs Mayfeld and Koska Reeves were nearly instantly blown out at 75% off. Why the quick clearance? Why isn't a new Mandalorian just selling like hotcakes? I'm not sure, but given that the original Kenner kids are all around 40, maybe the generation of collectors is starting to move on to more adult pastures. (No, not smut.) 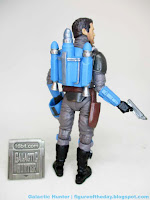 At least one other figure uses elements from this mold, the excellent Death Watch Mandalorian [FOTD #2,926] which is the better figure. The bodies are the same, but Death Watch has a non-removable helmet, and Axe Woves' removable helmet seems to have what the kids used to call "fivehead." The dome above the visor is a little high, and it's a little smooshed. It's still a good figure, though.

Like the costume on the show, the figures share a lot of parts and a lot of colors. A lot of the blue armor is blue on both figures, except the area surviving the visor and the chest armor. Other than that, and a blue body glove, they're very much alike. And that's good! It's a mass-produced suit from a mold, so it makes sense that you get the same great ab joint, the superlative holster, and the great arm and leg movement. He stands without too much fuss and other than somewhat stiff ankles, is super easy to pose. Hasbro future-proofed the mold with holes in the jets, so you can pose him on as-of-yet not-existing stands or flame jets. Hopefully we'll see such parts down the road. 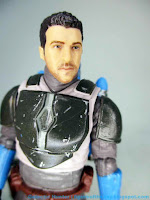 Other than the helmet's big blue sea on top, I really like this figure. The face portrait is good, articulation is great, painting is better than average, and it's the kind of figure that makes you say "I don't need the 6-inch one... sure I might buy it, but this is good enough." I'd say get it if you still see it out there at a fair price because it shows a lot of precision work went into it. The painted (not molded) hairline is one of Hasbro's best.

(Did anyone else read "superlative holster" as "superlaxative holster" and wonder what that meant? Would it be a holster that's ideal for a quickdraw or one where the pistol slips right out of the bottom? Just me? Bygones.)

I'm guessing figures like this will be sought out by customizers when they hit clearance. I have no problem paying more to make sure I get a specific character but if I want to build a platoon of these guys (keeping in mind they all have subtle differences to their outfits), I'll wait until it doesn't sting my wallet as much.

It is a great figure, though, and an appropriate exclusive. Now explain that "Boba Fett tax" collectors keep lamenting.