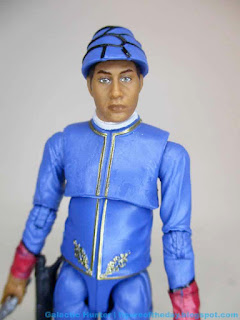 Bio: Isdam Edian was a human male who worked as a security officer in the Bespin Wing Guard, which was based in Cloud City on the gas giant Bespin. (Stolen from Target. There is no bio on-pack.) 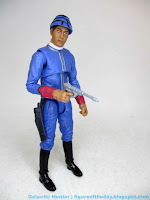 Commentary: Offered for the first time in a new figure format since 1982, the Bespin Security Guard (Isdam Edian) has been demanded by fans for quite some time. Since the line rebooted in 1995, old-school fans wanted an update of the original 96 carded figures, also Blue Snaggletooth, plus the Max Rebo Band, the Dianoga monster, and I could go on - there's a lot of stuff, but not that much considering Hasbro has produced literally thousands of Star Wars action figures. They just seem hesitant to remake the originals. After years of asking, Hasbro delivered the goods. Sort of. Kind of. This is the figure you asked for, but like a smart kid phoning in a term paper, Hasbro isn't living up to their considerable potential.

The head is brand new, and looks excellent for stand-in with a fuzzy photo on a cardback. The sculpted detail looks more or less like the cardback photo - that's admirable! It has that double-jointed neck that gives him a lot of range, plus the hat is a separately sculpted (but not removable) piece. It's superb. This is why the figure is frustrating to me - the mid-torso joint is ugly, and if you're going to make a new torso anyway, why not joint it at the belt region where it won't look as bad? Maybe you couldn't reuse the legs with that style of torso, but I just happen to have a very good solution to that problem. 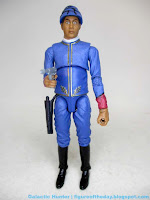 Reusing Solo: A Star Wars Story Lando's figure's arms was a good idea in that they're incredibly good. You get bend-and-swivel wrists plus elbows with a pretty deep bend. They're not as good as a 2022 figure, but they're the next best thing and largely excellent. But Hasbro cut some corners. It's not a bad figure, but at first glance you can tell that the guard is based on existing molds. It's not obvious, but you've seen those legs used for Bespin Han Solo and General Lando Calrissian before - the lack of rocker ankles and the 2010ish hip joints are a dead giveaway. (As is the old copyright date.)

It's weird to have a long-desired figure finally delivered, with the new parts looking completely excellent and the old parts looking - to me, at least - like old parts. I love the blaster and that it fits in the holster. I'm enamored with the fact that we got an obscure background human figure, because Hasbro seemed almost totally against doing that sort of thing for the better part of a decade. It ticks a box, and if I gave it a letter grade it'd be an A for effort/cleverness and a C for satisfaction. It's good! It could be a bit better, painting over the shirt sleeve sculpt is pretty corny and the legs feel very old-hat on a shelf of 2022 figures. But for some fans it's not about the figures - it's about the packaging, and we definitely got the packaging. (I have high expectations for a $14-$15 super-articulated figure that I've waited decades for them to remake from a 42-year-old movie. Whereas a Kenner-style figure can be the wrong colors but if it can sit down and look vaguely right, I will sing its praises, because it doesn't have to be great to meet expectations.)

Collector's Notes: I got mine from Walmart. As far as I can tell this exclusive figure never arrived in actual stores, and was offered by Entertainment Earth less than a month after Walmart fulfilled my order.