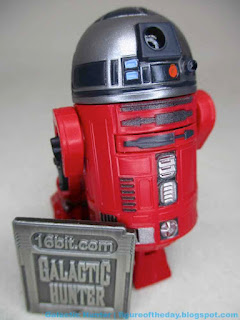 R2-SHW (Antoc Merrick's Astromech Droid)
The Vintage Collection 3 3/4-Inch Action Figure
Item No.: No. F7789
Manufacturer: Hasbro
Number: #260
Includes: Scope can be removed
Action Feature: Pop-up scope, retracting third leg
Retail: $16.99
Availability: October 2022
Appearances: Rogue One: A Star Wars Story
Bio: R2-SHW was an R2 series astromech droid that served in the Alliance to Restore the Republic during the Galactic Civil War against the Galactic Empire. In 0 BBY, it flew in a T-65B X-wing starfighter with General Antoc Merrick, the leader of Blue Squadron, during the Battle of Scarif, in which the Alliance engaged the Empire above the planet Scarif in order to try and steal the plans to the Death Star superweapon. (Stolen from Wookieepedia. There is no on-pack bio.) 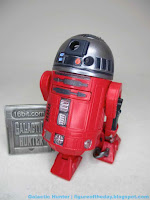 Commentary: Since this is probably the only version of R2-SHW that we'll ever get, I'll just say I don't find it to be satisfying. Given what you get, what you pay for it, and what its function in an X-Wing is, you won't get your money's worth here. He needs to be bigger, and since they cut the gear it would've been nice to have something - even a booster seat - in the packaging to make up the perceived shortfall. But it's not like Hasbro made a bad figure here - if you leave it carded, it's nice. The packaging looks good and the figure looks good in it, and I increasingly feel like a crazy person for saying things like "this toy isn't as fun to play with as it should be." If you just want a cool droid, this is it - but if you overpaid for an X-Wing a year ago and wanted to complete it, know that it comes up short.

A figure like this has very little that it needs to do. You and I will no doubt depart opinions here, reader, but R2-SHW need only be a plug for an X-Wing's socket. The utterly stunning paint job on Antock Merrick's X-Wing demanded a droid, and if Hasbro gave us the simple 3-jointed R2-D2 mold in these colors and just plopped it in as a freebie (it was a $5.99 mol) I assume most fans would be satisfied - this isn't a figure that needs ankle joints or a third leg, but we get them. And a sensorscope, and an opening datalink arm thing. And wheels. And ankles. It is surplus to requirements, and a great metaphor for where we are now. These are no longer toys, but preemptive answers to hypothetical complaints fans will have that it wasn't even more tricked-out. And the funny thing is, the figure may suffer slightly for it. 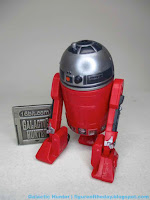 Antock Merrick's X-Wing vehicle mold started life in 1998 and was retooled to have a droid socket around 2002. That means it fits the bigger droid bodies better - R2-SHW uses a shorter, smaller droid body so his dome doesn't exactly pop out over the hole like in the picture on his cardback. It sinks in a bit - and it looks a little silly. If you grab an Original Trilogy Collection-era droid, it's a snug fit and the head goes exactly where it should. This little guy needs a booster seat. I still like the paint job - it's distinctive, and can't be easily replicated with Disney parts. The red body has a silver dome, and the panels seem to be a very dark gray color. You get a painted red dot under the glossy black eye, a couple of blue boxes, and no dirt deco of any kind.

They did a decent job here, and as far as I can tell this is the first any only full-body reference for the previously nameless character made to the public - so I assume it's right. Modelers seemed to guess on the color based on some comments they red somewhere, so we may be looking at a situations where fans influenced the final product. (It's happened before in some other lines when someone's DeviantArt page gets accidentally used for a deco sheet. If you see me in person, ask me about it.) It is hard to not be cynical since Hasbro has now raised exclusive (and shared exclusive) retail price over basic figures. This figure started life in late 2010 as a $10 R2-D2 toy with a drink rack, a lightsaber hilt, removable drinkware, and a drink dispenser. It was a small figure for the price, but the gear made up for it - now Hasbro removed the gear and marked it up 170%. While I am interested in having this specific droid, and they did a good job making a repaint of a character nobody really saw on-screen, but it hurts to be charged more for less figure. This is the kind of thing we used to get as wave filler when it came time for an annual repaint wave, and that sort of thing - at a regular price - was exciting and fun. We just got this mold as the Droids cartoon deco R2-D2 - with a big metal coin! - for $1 less as a Target exclusive. Rogue One fans will no doubt want this, as will droid junkies, but I can't say I feel good about what it costs.