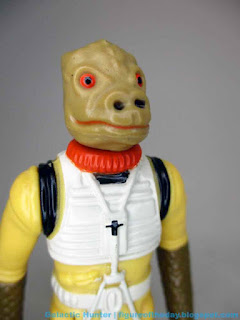 Bio: Two of the most feared bounty hunters in the galaxy, Boba Fett and Bossk have crossed paths over the course of their careers as both collaborators and competitors. Both had undeniable skill, but only one became a legend, (Taken from the figure's outer packaging.) 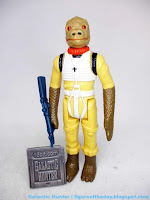 Commentary: I would've skipped Bossk because I have two older, slightly worn ones from when I was a kid. And that would have been a mistake! Sort of. The new reissue from Amazon made some changes - some good, some bad. There are quality-of-life improvements, as well as generation loss. If you have an old, absolutely mint one that you look at and never touch you don't need this one. But they did redesign the gun hand - and that's admirable. 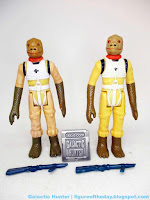 This is an all-new figure that is inspired by the original Bossk. Everything seems to be in the same place, but with minor differences - the little cross on the chest is much sharper now, the ribs in the vest are all at slightly different angles, and the sculpted detail is a bit softer. I assume this is due to scanning, or issues with resolution in digital prototyping that you don't get with wood or wax or other 1970s materials. My old 1980s Bossks are much sharper, with crisper scales and more defined elements in sculpting - but the new one has much crisper painting. Neither is "best" but each have their own unique benefits - not the least of which is that the new one isn't discolored from age yet. The old one in these pictures has faded, unknown to me at the time, and the reddish color is an oil that wipes off, leaving a much paler yellow suit underneath. Time is cruel. 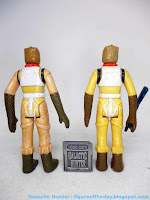 Bossk's joints all still work like always, and I put him in some vehicles and he said "thanks boss." Presumably. The newly retooled fingers on his right hand hold his blaster much more tightly - sometimes the vintage toy would drop it, but the new one is perfect. I hope they do this with lots of reissues going forward, because not being able to hold weapons well was a weakness on some of those old toys. Here, it's just plain fine. No complaints.

Bossk has no problems standing, or sitting, or holding his blaster, so he's a good figure. I assume most fans would be happy to get this brand-new mint sample of a figure rather than deal with eBay for a banged-up loose one, but it's worth noting the original blaster is a bit sharper with pointier details. The new one is rounded off some, looking like a copy made from a copy - so it's visible different. The Kenner blue looks sharp as ever, and it isn't as glossy as my old blaster. It's also a tiny bit smaller, but you wouldn't notice without putting them side by side, and it's a minor difference in size. 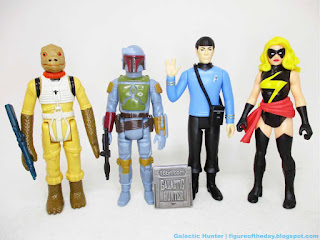 But is he worth it? An original Kenner Bossk off the package is about $16-$26 with a blaster, or more, depending on condition. Since this is an official Hasbro/Kenner figure and you get a Boba Fett with it, $28 is pricey. There are $10 Retro figures right now - but they're usually $12. The upcharge is unfortunate, and hopefully temporary, making this a good deal in the sense of "you're not going to get a cheaper Boba Fett and Bossk bundle elsewhere." At $20 I'd say push people out of the way and get one - at $28, it's charming. If you limit yourself only to Kenner toys, I think you will find it likable enough and well-put-together enough to scratch that "but I want an original!" itch in most cases. But not carded cases, because the packaging is an eyesore with the sticker and fake wear on it.

Collector's Notes: I got mine at Amazon. It was supposed to be released January 1, 2023, but arrived two months early.