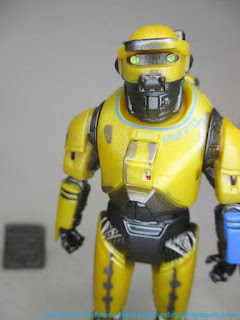 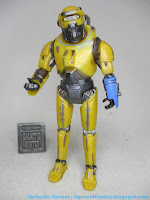 Commentary: I have to admit that NED-B being a Disney figure (and not Hasbro) was a surprise, but it was also a surprise that this super-articulated take on the lifter was actually smaller than the Retro Collection NED-B [FOTD #2,956]. I believe this is also the first figure in recent memory - as in, this century - where we got a "Kenner" figure prior to the "Vintage" figure. (Although Reva, Vader, and Obi-Wan did all hit roughly the same time as their other counterparts, we're still waiting on the other Inquisitors.) 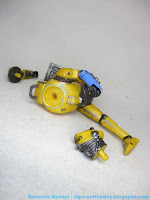 Hasbro's Kenner-ized NED-B is a pretty good figure, lacking some painted details and scuffs from the TV show but he's generally a sturdy figure that stands up well. And so is Disney's, although the House of Mouse edition has a lot more paint, no hammer, and can be taken apart. There's also additional articulation that will probably make the Disney one the go-to for most collectors who have no love for Kenner. The colors largely match the TV show, with proportions that are a lot closer than the Kenner version. The crotchial region is a lot wider on the toy, but the smaller forearms are a closer match to what we saw on the screen. The head does a better job drawing you to the yellow eyes, and you also get the little painted red light on the chest. While there is room for improvement, I would say this Disney version is probably good enough that you won't need Hasbro to remake it. I'm perfectly happy with the Kenner one, but this is nice too. 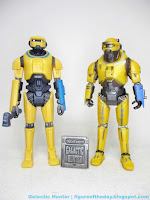 The figure's articulation is par for the build-a-protocol-droid course, with bending knees and swiveling ankles and all of that jazz. The wrist swivels are blocked slightly by the forearms, but at least you get hip swivels. The arms move freely, the elbows bend or swivel, and you can pop that head right off. It's not easy to swap his bits with all the other droids, but at least you can play some sort of Ugnaught water polo with his parts once you take him apart. 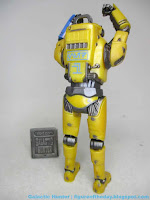 If you're still collecting 3 3/4-inch super-articulated realistic-style figures from new streaming series - and why shouldn't you? - this is a must-have addition to the collection. I think it was a misstep to not sell it as a single figure, but at least at $50 it's a good set with good companion figures. If you can score it for retail price, he's worth it - four good figures for under $50 has, sadly become a bargain instead of a begrudgingly pricey purchase. If you want to know "Kenner or Disney?" I'd say get whatever you can find first, because as of right now the per-figure price is largely negligible. This would probably give a slight edge to Disney due to articulation and play features, but you really do want that hammer. It's got a lot of personality.

Collector's Notes: I got mine from my pal Greg! Thanks Greg.