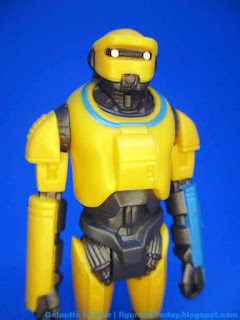 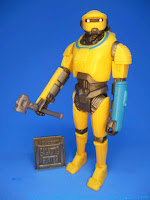 Commentary: I love droids! Back in the 1980s, most movie droid figures were extremely simple - the bulk of them had little to no paint on the limbs, and any sort of painted details were frequently dropped. That means NED-B is a little better than most, given he has a painted blue arm (unlike C-3PO who was just one color) and has a lot of painted gray area around the joints (unlike, well, everybody.) He may be closer in deco to the 1990s, but parts are just off-model enough that he feels more or less at home near old Kenner figures. If he was standing in the background of a Droids episode, I think he'd fit right in. Overall the Obi-Wan Kenobi wave of The Retro Collection is neat, but a lot of it looks just a bit off to the side of actual Kenner figures - unlike the second The Mandalorian wave, which mostly felt pretty spectacular. 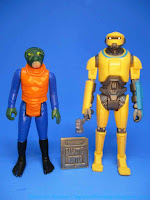 This load lifter is big - really big. He's a bit taller than Darth Vader, roughly as tall as a Vlix, and generally diverts from the skinny look of most Kenner figures. But he's sturdy - he stands, he sits, the joints move well, and the neck turns without a fuss. There's not too much color on him, and they dropped the Aurebesh lettering and that probably keeps it looking "older." They could have also dropped the gray knee and shoulder joint paint as far as I'm concerned, and it would have been great. The figure's closest vintage design analog is probably EV-9D9, who was tall, skinny, and had no paint on the limbs - but does have a "mask" around the eyes, which is replicated well on NED-B here. It's weird to say "Hasbro could have left off the blue paint entirely," but I really believe they could have - it still would look great, and may fit in better with real old Kenner figures. 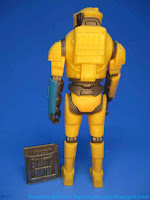 Unlike most Kenner droids, this one has hands that were designed to grip things - putting him in good company with Zuckuss, 2-1B, and arguably IG-88 (and IG-11.) NED grips his hammer just fine, and you can probably hand him a blaster too - it works, it fits. I handed him a Stormtrooper rifle and he holds it better than an actual Stormtrooper's hand. The hammer itself is nothing special, but it shouldn't be. It's a fun and funny choice of accessory given the impression it left on the show, especially compared to its lack of practicality. But as a kid I think I would have a lot more fun hitting Stormtroopers with a hammer than I would pretending to go "pew pew pew" with a gun.

For what it is, and for what it costs, this is a pretty fun little figure. I wish it was somehow less detailed and more detailed - like I wish his chest lights were painted (like Darth Vader), but Hasbro could drop the blue and some of the gray and I wouldn't miss it at all. For fans of 1980s-style robot toys, I think you will enjoy this one. If anything, he's probably the most interesting figure of the wave simply because there's really not much else that's close to him these days. Get it if you see it, and if it's on clearance, buy two. But be aware, it is a little too big to fit some Kenner vehicles.