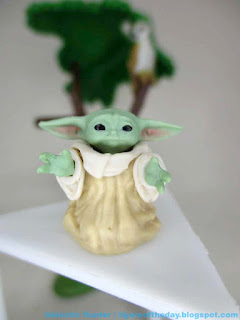 Bio: Now a wandering Jedi, Ahsoka Tano forges her own path in the galaxy, righting injustices that she discovers. Grogu, a mysterious alien, is being pursued by bounty hunters. (Taken from marketing copy. There is no bio.) 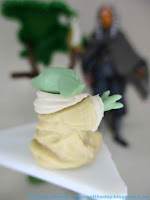 Commentary: At maybe 3/5 of an inch tall, Grogu is tiny. This one seems particularly small, and he has but one joint - at the neck. The body has uniquely posed figure that may share tooling with the Incinerator Trooper's Grogu, but as Walmart has still not shipped me mine I can't be sure. I can say this is different than the other ones just because there's less articulation. One joint is not really great, and Hasbro's decision to charge a lot for him in packs as a bonus accessory (or as a figure on his own) is kind of troubling in spots. But, he sells. He sells as collectible figures with multiple series, he sells as plush, as dolls, as statues, as action figures, as magnets, Grogu is this century's E.T. - but successful. 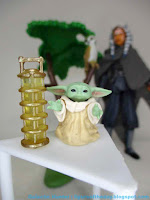 It's funny that I have at least two unopened 3 3/4-inch The Vintage Collection Grogu figures in my house (Spiders, the Razor Crest one) and at least two on pre-order. The Kenner-style one scratched the itch - but these are more accurately scaled. This figure has pink ear interiors, black eyes, and not much else. It's kind of criminally expensive for a slug accessory that's slightly better than what you'd get out of a gumball machine for fifty cents. There are no sculpted feet, the hands are outstretched but not jointed, and the head pops right out if you touch it funny. I see the collar and hands/sleeves are separately molded, no doubt to allow for future use of the tooling with cookies, shifter knobs, or other accessories. 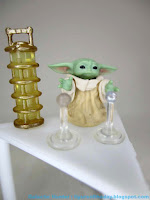 The sculpt is perfect, the deco is very good, it just doesn't do much of anything - it's a teeny-tiny collectible figure. I'm a little surprised Hasbro didn't embrace Grogu as a value-add, much like a coin or a Freeze Frame. If they gave you every last variation of a 3 3/4-inch scale Grogu on a Vintage cardback with another figure for $20 - say Dr. Pershing, or The Client, or the aliens who kidnapped him in the first place - it'd sell. They could charge more for it, and it'd be a fun gimmick - especially for little green man completionists. It's a perfectly nice little figure - and I am glad they're all selling - but it would also be nice to see tooling devoted to Q9-0, or any of the dozens of awesome new major and minor aliens and droids appearing in recent shows.

I'd say this set is worth it if you missed out on Ahaoka or a previous Grogu, especially because of the included Morai. For $20, it's neat enough. But if you've already got a Grogu, you might not see the need to have this one too - despite the grabby hands, and the Force-levitated shifter knob. It's something. It's not bad. It's just that we keep circling a lot of the same characters over and over, and a little diversity never hurt nobody.

Good looking figure and photos. Thanks.

The Grogu with the Incinerator Trooper has articulated shoulders, which is pretty impressive at this scale.