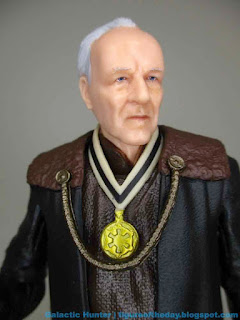 Bio: A mysterious Imperial who keeps a low profile in a safehouse on Nevarro, the Client is the face behind an otherwise faceless bounty, an off-the-record assignment with a high value. (Taken from the packaging.) 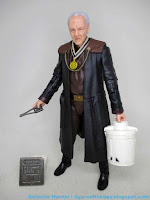 Commentary: One of the things that The Mandalorian got especially right was how it recalled various elements of the original Star Wars film while giving us something that was effectively new, or at least, a marvelous remix. "May the Force be with you" has been supplanted by "This is the way." George Lucas used a lot of historical references when making the bad guys, and if you can see (or not see) what he did there, the skin-crawlingly creepy performance the delightful Werner Herzog gives to The Client is one of the many unforgettable things from the very first episode. Effectively an exiled government official who set himself up as a sort of gangster waiting to reclaim the galaxy for an Emperor that - at the time - no longer exists, his somewhat off-model appearance and big Imperial cog necklace evoke a sort of official from a kind of government that should make you feel a sense of unease. His snarling really drives it home.

I'm thrilled to see this figure, in part because Werner Herzog isn't just a great director but he's become something of a beloved pop culture fixture. Paul F. Thompkins' impersonation of him is a hoot, Herzog's Parks & Recreation appearance was one of the most delightful TV moments in recent memory, and now he's a plastic man. (I would've preferred 3 3/4-inch, retro or vintage, but don't I always?) The outfit is pretty spectacularly evocative of the bad guys from the saga. The belt and hte clothes under the coat look a lot like Imperial Officer gear. The coat itself looks sort of like a modified First Order coat. I had to compare the boots and legs against other figures, because they looked so familiar - but with the newer-style knees, they're new too! the txture on the coat is remarkable, the boots' texture is good, and the body and pants are about typical. They did a good job giving him a bit more color than we usually get on the old Imperial suits. The gold medal, ribbon, and chain are also particularly well done, but what really struck me was his neck joint. It's not obvious, but there's an extra cut under the three-level ribbon so the neck moves in multiple spots, allowing him to look up, or hunch over, or lean to the side. It's a nifty addition. 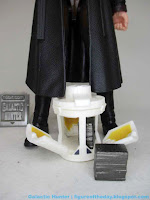 The head is really good, a bit glossy but clearly Mr. Herzog in the plastic flesh. There's a bald spot, thin white hair, and signs of age - plus squinty eyes. It's excellent, but getting certain kinds of skin perfect is a challenge. The hands do a good job holding the accessories, but the lid of the container is a weird fit. The fob fits fine. The figure stands well, with great cuts on the elbows allowing a good range of movement. It's worth noting the hips have a thigh cut, a ball-jointed hip, and bend-and-swivel knees - so articulation is surplus to requirements and Hasbro probably could have cut the thigh cut completely to save a few bucks and not lost any movement. The coat does get in the way of some movement, but you can also have the figure sit down with the support of the coat serving as a chair of sorts. It's weird. But Star Wars done right tends to leave us with weird elements on figures that result in a memorable play time, like the old Kenner R2-D2 rotating and pretending to be a cannon.

I'm glad Hasbro (or Lucasfilm) stuck to their gun and left blasters out - he never shot anybody, so giving him the camtono (ice cream maker) makes a lot of sense. You can give it to Mando, and he can hand off the beskar inside. The lid pops off, or you can fold down the sides. If that weren't enough, you get a tracker fob - it's not the first time we got one at this size, but it's a welcome accessory. Not everybody needs to be strapped.

This is the kind of figure you make for collectors - the old guys with faded hair aren't typically what sells to the tiny tots, but adults who really dug Fitzcarraldo are in for a treat. This was a great bad guy and I love that, in the grand tradition of early Star Wars, he doesn't even have a name. Thanks to the famous face, distinctive costume, and menacing demeanor, I'd say this is a must-have figure. Unless you find him too unsettling, in which case, maybe skip this one. I'm just thrilled to see more new characters from the 2019 debut given that it has been over 2 1/2 years. They didn't forget him!

Email ThisBlogThis!Share to TwitterShare to FacebookShare to Pinterest
Labels: Empire, The Black Series 6-Inch, The Client, The Mandalorian (Streaming Series)