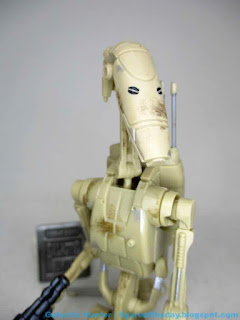 Bio: The soulless ranks of the Separatist armies are dominated by tall, thin B1 battle droids controlled by centralized command center. They often suffer programming glitches that manifest as personality quirks. (Taken from the packaging.) 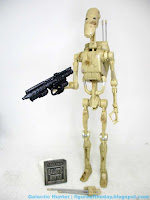 Commentary: This Battle Droid is the same as the Best Buy carded figure (which I haven't opened yet), and both are almost the same as the 2019 Battle Droid [FOTD #2,579] sold in the main line. For army builders, the slight deco variations are just what you want. For everybody else, this means there are three "just different enough to make you mad" Battle Droids in this line - and counting.

It's worth noting that the 6-inch Battle Droid is one of Hasbro's stronger efforts. I don't care if you hate the prequels, it's a good figure - there are lots of joints, good option parts, and he can crouch down like in the movies. The design is very good and not nearly as spindly as some of the 3 3/4-inch Battle Droids we got after the 1999-2000 Episode I line ended.

What I don't like is that the deco is seemingly the same paint masks, but slightly differing colors. The silver scuffing all seems the same, with added dirt markings in slightly lighter dirt. In a display you could probably see these as slightly different - they're good markings, and the change in brown is at least a change even if it isn't a significant one. Changing up the scuffs and markings make army builders worth re-buying, although in this case all three tan Battle Droids are probably close enough to identical that it may not be worth buying all the flavors.

I would have preferred Hasbro spend a couple of pennies and add red, yellow, or blue shoulders to give us another squad variation. But they didn't. If you bought this set anyway, it's one more to add to your ranks. Or more junk for the drawer if you're trying to keep your displays tight. Or you can display one with the antenna, and one with the backpack. I was hoping they would have updated the damage, but they didn't.