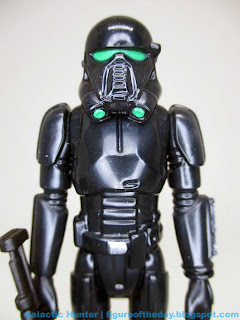 Bio: Elite soldiers, death troopers are encased in specialized stormtrooper armor with a dark, ominous gleam. They serve as bodyguards and enforcers for figureheads like Moff Gideon. (Stolen from the marketing copy. Packaging has no bio.) 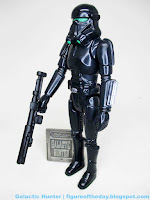 Commentary: Trying to get in the heads of the current Hasbro designers and how they view "retro" is tough - heck, so is understanding what Kenner was aspiring to do in 1978-1985 - but you can see some of the thought process when you look at this Imperial Death Trooper. I'd love to see more Rogue One guys in this format, but this one is a nice start - clearly the designer was copying the body language of that original 1978 Kenner Stormtrooper action figure. The same stiff pose. The non-articulated neck. Even the blaster integrates the original Kenner Stormtrooper gun in its design - there are just some added greeblies bolted on to it. We know Kenner likes to do things like that for some of their old weapons, and it's a pretty good nod to the actual movie design too.

This trooper has a torso about the same size as the original regular Stormtrooper, but much longer legs. It's a little weird, but hey, whatever, fine. Many of the lines and details are definitely inspired by the old Kenner toy, with two functioning hands this time. There's even the silver guns, which I assume Kenner would've left unpainted but I'm not complaining they're decorated here. The green lenses are also an interesting choice, as the lenses of troopers are largely depicted as black in the older toys regardless of the accurate coloring. (I would've gone with black lenses, but that's me.) The figure's armor also lacks the holster or the unique buckles over the shoulders, but I would argue that the Kenner house style is to get some of the details wrong - as long as it evokes the figure, it's close enough to be acceptable. If you disagree, I assume you also don't like Kenner R2-D2. If you do, well, there's no hope for you. 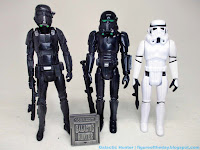 I find the details to be a little softer and rounder than I would like, but it's still a nice, glossy figure that looks like someone did their homework when making this figure. This figure is almost unpainted, and I assume Kenner would have done something similar. I like it, even if it seems to be a little too wink-wink to the fans of old Kenner figures. I might buy a few more if I see them. I doubt you need an army of Kenner-style Death Troopers, but I might. I admire their devotion to such a niche product and I can't wait for the supposedly not-too-far-off Kenobi wave. (Which, I admit, looks a lot less consistent with their design cues. Lots of vinyl capes and no telescoping lightsabers, what's up with that?)