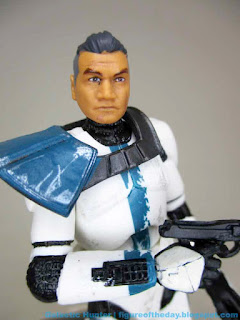 Bio: "Howzer" was a clone who served as a Clone Captain in the Grand Army of the Republic and eventually as a stormtrooper captain in a battalion of the Imperial Army, shortly after the Galactic Empire's formation. (Taken from Wookieepedia. There is no bio on the figure's packaging.) 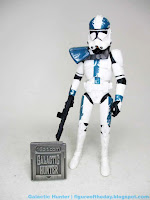 Commentary: Another day, another repaint! I'm sure my disdain for what feels like an endless torrent of repaints for minor characters and not enough major characters - the titular The Bad Batch group still isn't out in any collector format in full, and none are in 3 3/4-inch yet - but we've got Clone Captain Ballast. It's a 2011 mold with a nifty unmasked head, blue markings that probably should be a tad greener, excellent battle damage, and the wrong name on the box. I assume this may have been developed before the episode aired, because it's so close to being excellent minus a couple of big, weird swings-and-a-miss. "They got the name wrong" is kind of startling in this day and age, though colors can and often do change during production on a TV show. I can't find an obvious production date stamp on the box or the figure, but pre-orders went up pretty close to the first appearance on TV.

His unmasked head has grey, buzzed-down sides and some longer, darker hair slicked back - and it looks great! The eyes are a little more piercing than the show, but that's not necessarily bad - he really seems to be staring into something. The eyebrows are good and there's plenty of life in that face of his. Should you leave his helmet off, his pauldron is rather loose - comically so. You can just have it spin around, it would have been nice to have Hasbro glued it down, or design it to grip the neck peg. It looks good, though, and I like the silver battle damage. 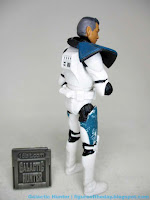 His armor on the recycled 2011 body is good for 2011. Today we know Hasbro can do better, so I'm hoping we see a new Clone mold some day - until then, this is what we have. The scuffed-up patches of blue look great, but I'm less and less sold on silver battle damage. It's shiny, and that doesn't quite seem right anymore. Depending on the room lighting, it blends right in on the white armor, and sometimes looks odd against other colors. It's distinctive, the patterns are good. I also like the painted communicator on the wrist. I just wish things more closely matched what I see on screen, but that sort of thing happens all the time when you try to get toys on-shelf (or on-pre-order) for a new show as it airs. I can't explain the name issue, though.

Articulation is the same as it was 11 years ago, which was a tad awkward but basically good. Today the weird gait, seemingly overlong legs, and increasingly dated arm articulation will probably result in most samples of this figure remaining carded or being opened, examined, and shelved until you move or decide to give up collecting and sell it/put it in storage. The helmet does an excellent job of keeping that loose shoulder pad in place, but since you won't be playing with this one, will it matter?

I am happy to see more figures in this line, but in another, more accurate way, I'm not. Given how many photoreal reruns, gold repaints, and other 3 3/4-inch figures that recycle old tooling to give us something "new" when straightforward reissues might make new fans happy, or when the main characters from a show are absent, it's kind of hard to say "wow, I'm really glad to have this." Hasbro did a good job refurbishing an old design to the best of their ability and delivered it on the quick - that's worthy of praise. At the same time, figures like this feel less and less essential to my general happiness about collecting this line at this scale. It's adequate, but Amazon was sitting on them for quite some time and having already bought hundreds of clones, I can only hope that there are a few fans out there that were giddy to actually get their hands on this figure. I'm just not one of them.

Collector's Notes: I got mine on Amazon. Interestingly the price has been going up and down, but is back up to going up again.