Star Wars Figure of the Day: Day 2,944: The Armorer (The Vintage Collection) 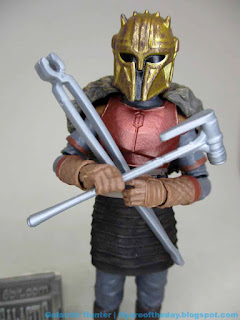 THE ARMORER Small Debut
The Vintage Collection 3 3/4-Inch Action Figure
Item No.: Asst. E7763 No. F1093
Manufacturer: Hasbro
Number: #179
Includes: Hammer, tongs
Action Feature: n/a
Retail: $12.99
Availability: December 2020
Appearances: The Mandalorian
Bio: The Armorer forges beskar armor in the ancient tradition of her people with exacting precision; when combat is required, she proves to be efficient and resourceful (Stolen from the marketing copy. There is no bio.) 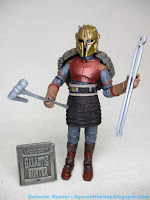 Commentary: I forgot to review The Armorer! She came out nearly a year ago and turned out pretty well - she's basically a smaller version of the 6-inch figure, with some pretty fancy deco. She was fantastic for late 2020, before Hasbro really made a big leap forward with better hip joints and improvements in deco. She's still great! She's just not as good as the recent Bo-Katan Kryze, Kuiil, Ahsoka Tano, and other figures from these shows. This figure is very much like the character - there are reasons to love her, and there are reasons to find her a little iffy. She's fascinating, but not perfect.

This figure is a stunning display piece, but not a great toy. It takes a little effort to get a good pose out of her so she doesn't fall over, and the older bend-and-swivel hips aren't great about helping her stay up. Once you get them in place - a challenge, given the rubbery skirt piece - they're unlikely to budge without more fidgeting. The arms are great, and the elbows have a nice cut in them that lets you set up some good combat or blacksmithery poses. The helmet is double-jointed, so this mold seems to have been future-proofed for an "unmasked" variant if Hasbro ever wants to do one. (I'm hoping a few characters remain mysterious and unnamed.) What's neat about the helmet is a layer of dirty detail, minor signs of age or use are baked in and really look sharp. Hasbro did a great job painting this one so the plastic head looks like metal, as opposed to the "Kenner" one which very much does look like plastic. 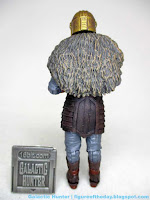 It's worth noting her cape is also exquisitely painted and inflexible, with lots of sculpted hair detail and some nice paint to bring it out. I also love the quilted gloves and bulky boots, which all seem like design cues from 1980s costumes and figures. The rich, almost metallic chest armor looks great and so do the painted metal bits on her belt. Hasbro didn't skimp on the detail here, even though I'm sure they could do a premium version this one is pretty spectacular for the asking price when it came out.

Her accessories fit in her hands a little loosely, but they mostly stay put. It would be awesome to have had a deluxe version with a forge and other accessories, but I suppose that may come down the road. For now, Hasbro delivered the goods with a decent figure. She's sculpted well, painted nicely, and jointed as good as you can reasonably expect for 2020/2021. It also would be nice to see her re-enter circulation as she never really sat around and I'm sure lots of fans may have never actually seen this figure. I saw more of her Carbonized exclusive release, but I think I prefer this one. I like the Kenner one for other reasons, but both of these figures are very good examples of their respective formats and I can't assume Hasbro will go back and re-redo the Armorer unless she gets a significant costume change. Go ahead and get this one if you skipped her, even if she is somewhat prone to falling over.