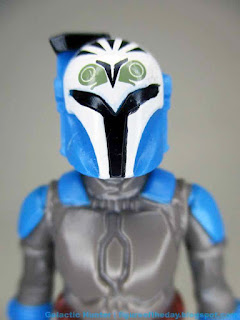 Bio: Bo-Katan Kryze has been fighting for the future of Mandalore since the Clone Wars. The last of her line, she leads a team of Clan Kryze Mandalorians striking back at the Imperial remnant. (Stolen from the marketing copy. Packaging has no bio.) 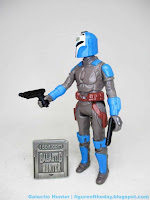 Commentary: For a Mandalorian that appeared on three TV shows Hasbro and company took their sweet time delivering Bo-Katan Kryze to plastic. In the last year we've had a Vintage figure, a The Black Series figure, a Mission Fleet figure, this figure, and a 6-inch "value" figure I haven't been able to find yet but I'm told it's coming. (I've seen pictures.) I'd like to say that it's a miracle that we got her at all, but this one may not be a perfect interpretation of the old Kenner aesthetic. The sculpt is spot-on, but the deco takes a couple of bad swings.

The sculpt looks just like a real toy figure from a couple of decades ago. It may lack some of the literal shine of the original Boba Fett, but everything else seems about right. Since she has two blasters, and she has two hands sculpted to hold weapons. She doesn't have a removable helmet - which Kenner didn't always include with its figures, as it was rare for figures to have two accessories (let alone three.) Everything is a bit simpler, but most of the major milestones are here - there's a knee pad, her armor has the diamond-shape and three notches above her belly, the twin non-functioning holsters are there, you can see the sculpted, unpainted armor and lots of stitching and pockets - but not everything. In many respects, she looks like a figure that'd be right at home in the Droids Kenner line of old minus deco and accessories. She can hold her blasters well, she can stand and sit, and she fits well in most of the vehicles I grabbed to play around with. (Fisher-Price Alpha Star for the win.) Her rocket pack is one part that feels a little more modern - if you look at it from the side, it's sculpted in a way that seems like it was made to be easy to pry out of the mold, whereas Boba Fett figures had separately molded rockets. I don't know if this is the exact shape Kenner would have used, but it's certainly one way to keep it simpler and the little dab of paint at the top of the rocket really sells the illusion. Much like Boba Fett (Morak), her helmet and rangefinder shows signs of an imaginary Kenner sculptor that saw the 1979 Boba Fett and said "we can do a better job" - her rangefinder is up, painted, and looks great. And she has vents sculpted on the back. I really dig this figure's design. 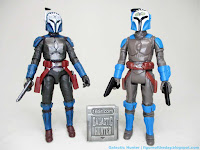 Deco is mostly great! I know you have to be picky about paint ops to keep costs down, and I assume licensors may insist on things, so I'll say I love the bright blue. It's very bright and feels very 1984-1985 when the figure colors were more saturated. The grey seems to be pretty good too, the brown is fine and nice. There are two spots that came up weird - the helmet's too good, the ornate owl eyes on the helmet are too crisp and sharp for me to believe it as an old Kenner figure. They could have left them off, or just put blobs or a couple of dots or a swipe of grey (like the off-model Imperial symbols on some old drivers) to skirt the fine detail issue. Second, the silver armor was mostly just left blank - they painted it on the back of her hands, but not the chest or thigh pieces and I don't know why. I would've gone with all or nothing - the blank chest armor is kind of distracting, so having made it or the body suit a different texture would've helped a bit. It's still a great figure, but they really need to break up the big blank body a bit with some new hue. 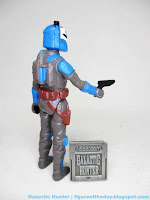 I still really like this figure - this whole wave caused me to pull out old Mini-Rigs, Rebels vehicles, and other 3 3/4-inch space toys because it's so good I just wanted to play around with it like when I was a kid. They really nailed the personality of the old figures and I'd happily buy her again if she got repainted as another character (or got a silver armor paint variant.) It's kind of amazing to live in an era where "Star Wars Action Figure" can mean such different things - maybe it's a $200 Hot Toys figure, or a metallic repaint, or a big-headed figure on a base. It's amazing to me that they actually, finally went back to do Kenner-style figures and I really, really hope they keep doing more because I'd love to have a Darth Maul, Pre Vizsla, Jango Fett, Wedge Antilles, Slave Leia*, and any vehicles they could do as cheaply as possible (see also: 2012-2014 cheapo vehicles like the AT-DP) because the darn things just make me happy in ways that buying, opening, and posing a 6-inch figure from The Black Series can't. Back in the 1990s I hoped either Playmates would do 5-inch figures or Kenner would just pick up where the old line left off - and what we got was really neat, but not "classic." With any luck, The Retro Collection will go beyond 1-2 waves of 6 per year because I will buy them all.

* - yeah I know Disney will never do it, it was just she or Oola - and Wedge and Tarkin - were probably the 3 movie figures that struck me as "missing" back when I was a kid/teenager. Followed by the Sandtrooper, Blockade Runner Trooper, Han Solo (Stormtrooper), and the Cantina band. You can see why I thoroughly enjoyed the 1990s The Power of the Force range.