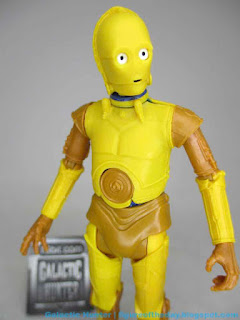 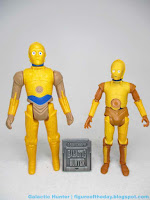 Commentary: I was so excited for this C-3PO - I got the original from a toy guy at a toy show around 1990, and I always loved it. And this new one? It's not great. Hasbro probably could have (and should have) used a 5-jointed figure only because the panels fly off pretty easily compared to the previous releases of this mold, which have been in circulation since 2010. It was impressive for the time, but once the gimmick doesn't work - in this case, the panels don't quite fit - a simpler mold would have been more fun. The back panel fell off while I was opening the packaging and doesn't want to stay in place. 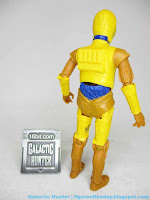 I like what Hasbro set out to do, and my sample is mostly good - a bit of spare plastic on the knee kept the thigh panel from fitting in place, but was easy to remove. He looks great, and the sculpt is appropriately C-3PO and it looks exactly how C-3PO looks. I love that it's nicely jointed, but a build-a-figure mold would've been more appropriate given the 1985 original used the 1982 removable limbs variant. Take care when playing with this one, because even if you don't touch his back that back panel does not want to stay put. The bright yellow plastic looks great, but if it isn't tightly affixed the dark blue under them will bleed out and really highlight when there's any gaps.

Deco is mostly the same as the 1985 original. Eye paint varies form figure to figure, with many having downward peepers that look iffy. Mine was painted correctly, so when you inevitably order yours online - Target cleared these out months ago - be sure to look at the picture closely. The shoulders, bely, and swimsuit area are brown just like the Kenner original - the hands, too. Weirdly they decided to shade the sides and back of the legs and knees, which were completely yellow on the original. It looks fine, but it's a weird departure and a way to add extra costs that could've been avoided. I love that they kept the blue neck, but the assembly shows some blue that shouldn't be visible - so it's good, but the simplicity of the original didn't translate super well to the new mold layouts. 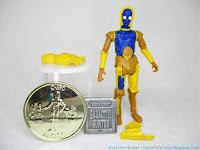 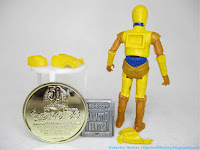 Given how little love Droids gets, there's nothing they could do to make me skip this one. I'd recommend it for guys my age who are me, but those just wanting a good C-3PO are probably already satisfied with what they own. I assume we'll never see a super-articulated cartoon C-3PO again, so I'd say go ahead and get this one. Just lower those expectations - quality control wasn't the best, and form fit is below average. But it looks cool, so carded fans will no doubt enjoy it and its coin. Hopefully they'll do some other characters. Like, oh I don't know, Vlix. Get this if the price is right, because hey, maybe we'll get some Ewoks some day. It's not like they don't have exploitable molds. Well, mold, at least.