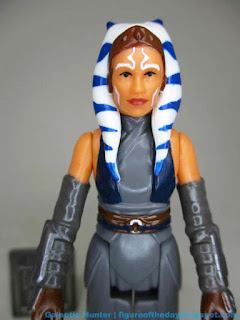 Bio: A Clone Wars veteran and now wandering Jedi, Ahsoka Tano forges her own path in the galaxy, righting injustices that she discovers. (Stolen from the marketing copy. Packaging has no bio.) 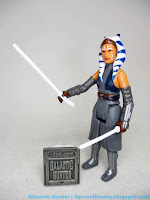 Commentary: It's kind of funny, just a few weeks before I got this retro Kenner-style Ahsoka Tano action figure, I got Hasbro's The Vintage Collection Ahsoka Tano (Corvus) [FOTD #2,927] which is one of the very best Hasbro 3 3/4-inch action figures we've ever seen. I'm also more than a little obsessed with demakes (Namco's Famicom/NES port of Pac-Man Championship Edition is a hoot, as is Eden Pixels' Alwas Awakening, also for NES.) Since I was a kid during the 1980s seeing figures like Ahsoka in this style brings to life a visit to Lionel PlayWorld that never took place - each batch of these is a rare treat. It's my hope Hasbro continues to bake a new batch or two every year. Eventually it won't be profitable to cater to Generation X kids (and Xennials) that refused to grow up, so I take this kind of toy as something you have to either treasure, or ignore. 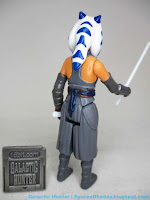 This particular Ahsoka Tano brings the ex-Jedi into live action and then puts her through a hypothetical Kenner fun factory. The pose and colors are great, and I'd argue she's probably a little better than Kenner would have squirted out in 1987. I think they nailed the shoes, but the pants are a bit rounder and much less sharp in their folds than I would have expected. Take a look at the 1978 Obi-Wan Kenobi or 1983's The Emperor or 1984's Anakin Skywalker. Or the Imperial Dignitary. The cuts around the hips are usually incredibly sharp, and the sculpted layers of fabric are similarly stark. Ahsoka's are rounder and softer (as are all modern Retro figures), giving her a less harsh appearance. Maybe the idea was to make her seem like the molds were showing some signs of age, but that's not my concern. Her pants look like her pants, and some details are a little softer. The painted finger gloves, painted silver armor, and the sleeves opted to not show any exposed skin in the holes - exactly as Kenner would have most likely done. (Heck, some small Kenner figures didn't even have painted eyes as the 1980s went on.) It's a little surprising that her belt has brown, blue, and silver paint given most figures of that era had little or none. Han Solo (Endor Trenchcoat) had a crotch that was totally blank, but the coat generally covered that up. It gives what would have been a very blank gray field of nothing a little more variety - and that's good. Her top has a little blue, too. 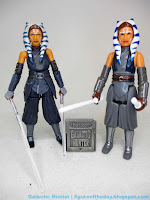 The head may be too good for the old Kenner era, but for all I know this fantasy 1987 Kenner Star Wars line raised prices for the extra accessories and said "hey, let's give her white face markings, painted lips, painted eyes, that ridge on her brow, and oh yeah - let's give her blue and white tails, too." Humans very rarely had painted lips in the original line (Hoth Leia comes to mind), and an injection molded head with two colors of plastic was generally unheard-of. I think Hasbro made a smart decision to focus on representing key landmarks of the character's face rather than dialing back the paint to mimic what we may have seen back in the day, particularly because Ahsoka without those blue stripes would just be disappointing. Despite these upgrades, she still plays a lot like an old toy with jointed hips and shoulders, plus a jointed neck. Hasbro's current sculptors graced us with a jointed neck featuring only slightly restricted articulation. A lot of old Kenner figures didn't have a big range of movement, so I appreciate that they made a figure that captures the flavor of the original while probably breaking more than a few rules of how limited those old toys would have been. Also she fits in my old Kenner vehicles (and my one Adventure People vehicle) without a hitch, which is really what matters most.

Her two lightsabers are modeled after the 1980-1983 Luke Skywalker model (Bespin/Jedi, later Hoth Pilot and Gideon's Darksaber.) Both have curved hilts but basically look just like what Luke had, other than length. She can hold them but the grip isn't too tight - this is also like a lot of old Kenner figures. Some would just drop the weapons. (Look, I loved those old figures but they're not infallible.) Hasbro absolutely made the right decision with their design, but I really would have loved her to have had a better grip on them. It's perfectly fine, but it's not perfect.

I've seen a handful of these guys hanging around Walmarts and Targets, which always kind of surprises me - but it also shows I might be out of touch with what some fans want. (My assumption is we're pretty starved so everything looks good.) Hasbro's retro Marvel figures are perfectly nice but don't scream "1980s Kenner" to me like Hasbro's retro Star Wars. There's a flavor that has to be captured. If you put Ahsoka on a big cardback in a line-up with the other 90+ originals and recent new sculpts, I think she'd fit in well enough. (Confidential to Hasbro: please make us a big poster checklist and hand it out at a convention, preferably one I am at.) Figures like this retro Ahsoka are probably not going to please fans who demand mega-articulation and authenticity. I assume they're not going to delight people who just want a top-notch figure of the character as seen on their TVs. Figures like this are primarily for old toy fanatics, and considering we're all getting a lot older I can't imagine we're going to enjoy this kind of thing forever. Like the NES homebrew scene, I recommend you enjoy her for what she is, and for as long as Hasbro continues to make this kind of figure.