Star Wars Figure of the Day: Day 2,941: The Mandalorian (Beskar, The Retro Collection) 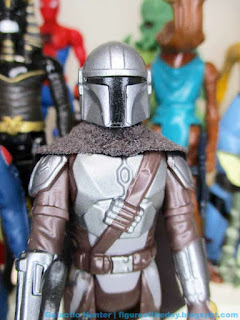 Bio: The Mandalorian, known to a few as Din Djarin, is a battle-worn bounty hunter, making his way through a dangerous galaxy in an uncertain age. (Stolen from the marketing copy. Packaging has no bio.) 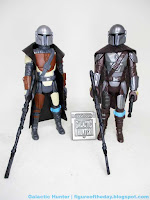 Commentary: A blast from right now! To modern fans, multiple iterations of the same character is obligatory. You're going to see 50 Iron Man figures per movie. But back in the 1980s, we had one Darth Vader for the entire 3 3/4-inch run of Star Wars (with accessory and packaging running changes,) but it was generally the same figure for the whole run plus or minus a few costume changes for Luke, Leia, Lando, Han, with new gimmicks on R2-D2 and C-3PO, and not much else. Back in the day The Mandalorian (Beskar) probably wouldn't have been enough of a change for Kenner to make and sell a new sculpt - maybe a deco change, but probably not - I assume they'd just keep selling the old one. In 2022, that won't fly, so Hasbro gave the 2021 figure a ca. 1984 facelift. 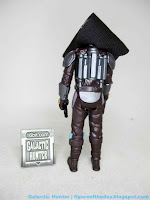 There are significant deco, cape, and tooling changes between the two retro figures. Hasbro swapped out the vinyl cape for a cloth one - which makes sense, new characters stopped using vinyl capes back in 1982. It hangs strangely, but rule one of Kenner is "you can do no wrong." (Well, if you made Darth Vader green, that would be wrong.) The cape hangs over his back, but you can kind of shove it to the side to get a gander at his rocket pack. All of his armor bits are retooled a tiny bit except the blue knee pad, adding in new detail and Beskar flavoring. The Shoretrooper-like glove armor remains the same, still lacking the blue triangles. His pose is pretty much the same as the original, as is the helmet. It's notable that Diamond Select made a jumbo 12-inch Mandalorian, and used a completely different sculpt - theirs has one "broken hand" that can't hold anything, whereas Hasbro wisely gave him two gripping hands for his two blasters. This is certainly a part of artistic license, because most Kenner originals only had one working hand. Figures with two accessories typically had two gripping hands, and why they didn't just give everybody gripping hands back in the day I'll never know. 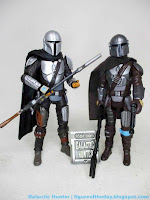 His blasters - an Amban phase-pulse rifle and a pistol - are the same as last time. They're good. They look like Kenner guns. The only way they could be more Kennery is to mold them in that weird blue color, which Hasbro has so far avoided for some reason, which is still sort of unsettling given Lando didn't have a black blaster for Empire figures back in the day.

I like that Hasbro gave Mando a cloth cape so he can go in vehicles - like the Razor Crest - without a fuss. Vinyl capes may look interesting but they're a pain to play with. I assume and hope another armor revision is on the way, which means a third figure is probably likely. It would be awesome to see them include the Darksaber (previously from Moff Gideon) and maybe retool him to have a bent elbow like Jedi Knight Luke Skywalker or the first 1978 Han Solo if we're going to get Kenner Mando 3.0 in 2023 or 2024... and I'd probably take that bet.

This is not my favorite figure from this wave (that goes to Boba) but Mando is still a lot more fun than the Vintage collection guys. Sure, the cape could be better. Yeah, the blue knee pad looks silly. But I've still got my old yellow lightsaber Luke Skywalker, a tall blue Snaggletooth, and other escapees from the Isle of Misfit Style Guide Toys. I love it when they do something weird, and this figure's improved functionality with a cloth cape and bonus bolted-on jetpack make it a cool "what if?" toy that seems like something Kenner would have made and sold in the late 1980s. Strongly recommended for Gen X and Xennials and anyone who unironically purchased mini-rigs for themselves. If you don't understand, that's fine. It's emotional. Some toys transcend "this is good and I like it" and hit the "you are six years old again and this figure would hang out next to Jabba the Hutt" and that's something no other figure format can achieve.