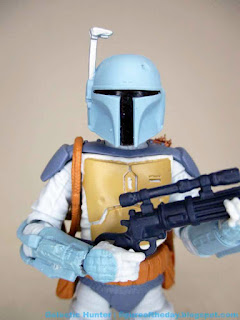 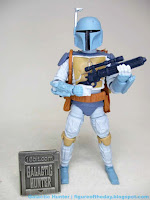 Commentary: As much as I would like to say "at last!" that wouldn't quite be true - this is the second take on this Boba Fett from Droids. Walmart got an exclusive Boba Fett [FOTD #1,482] with BL-17 way back in 2009 as part of a Legacy-era build-a-figure program where you could make a Dark Trooper. It was a pretty good era to collect these things. That version was a slight variation on the 2007 Animated Debut/Holiday Special figure, which itself was a redeco and retool of the 2004 Return of the Jedi Original Trilogy Collection Vintage release. The Droids and Holiday Special character models are very similar in color, but not identical - the chest armor is notable different, for example. What Hasbro gave us in 2022 is a Return of the Jedi Boba Fett figure in cartoon colors, and it's OK. Is it the final word on this version of the character? No. I like this figure a lot - heck, I'd have paid $16 just for the coin. But let's not kid ourselves, the unique chest is missing, the helmet is good - but not perfect. The boots are wrong, the holster is missing, and the 3 3/4-inch Hasbro rocket is unpainted, while the animation model (and the pictures for the 6-inch one) are at least a little bit painted. The 2009 release is a bit more crude, but it's arguably more authentic despite its metallic paint job. In 2022, Hasbro opted to give Boba a flat, cel-shaded look which I happen to like a bit more. 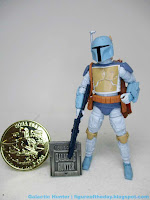 Complaints aside, this is a neat figure. I like the brown mustard chest armor, the blue helmet and vambraces are distinctive, and while I might've poo-pooed the painted-over dents a few years ago, we now know that Boba Fett has absolutely no problems repainting over his dented armor. (Sure, it's undented on the cartoon, but I don't expect Hasbro to shell out for all-new tooling if they can probably get away with using what was already paid for.) The gray bodysuit is perfectly nice, and the Wookiee scalps are a light brown. His cape is also an orangey brown, and it looks fine. For a repaint, I'd say that Hasbro did a very good job picking the most modern Boba Fett mold in this size, and applying what seem to be the most reasonable colors. His blaster is nothing special - he can hold it, and it looks fine. There's no reason to complain, but it is odd that the 6-inch version has more painted details on the jet pack. 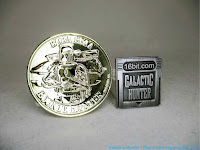 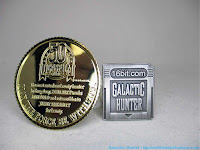 Since this is the most recent version of cartoon Boba Fett in this scale, I'd recommend it - I can't imagine it will be the last, and if Hasbro ever goes back to the well for new tooling for Boba (or Vlix, or the Fromms) I think that would be pretty exciting. This figure reminds me a lot of the repaint waves we saw a lot from 2005-2009, where Hasbro did a good job delivering more figures with whatever tooling was available. I like that it's a different take on cartoon colors Boba Fett, and I appreciate it'll stand apart from the ones I already bought. But for a $3 premium over the regular figure, I would really have liked to have seen some new tooling, or a bonus accessory... but since it's from Droids and in Droids packaging, I'll happily fork over my money.

Comparison shot of the Droids and HS versions?