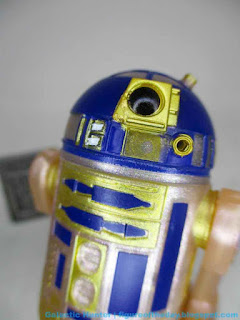 R2-W50 Disney World Exclusive
Star Wars Droid Factory
Item No.: ???
Manufacturer: Disney
Number: n/a
Includes: n/a
Action Feature: Comes apart
Retail: $12.99
Availability: May 2022
Appearances: n/a
Bio: AR2-W50 is a unlike any other Astromech Droid in the Galaxy. As a loyal Astromech, R2-W50 loves on Naboo serving different members of the Royal house. His droid build is similar to other classic R-series droids, but features an iridescent coloration of his body. Join R2-W50 on his adventure across the galaxy. May the Force be with you... and your Droids! this Astromech Droid figure was created to commemorate 50 years of magic at Walt Disney World Resort. (Taken from the figure's packaging.) 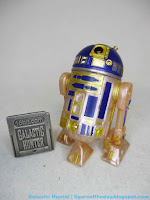 Commentary: I am simultaneously attracted to and repulsed by R2-W50. Theme park merchandise must always exist, as must anniversary swag, but there's something deeply weird and kind of unpleasant about Disney conventions and theme parks having mascot droid figures that exist for no reason other than for you to buy it. It's not like R2-W50 is rolling around the park or something - this figure's entire reason for being is so you can buy it. It doesn't really fit in the look of the movie figures all that much and the clear-ness doesn't make a lot of sense as an off-camera figure. On the other hand, if this was just some weird designer toy I'd totally be into it. I guess that's my hypocrisy for you. I'll take weird for the sake of weird, but when it's weird in the name of servicing a corporate mascot and/or siphoning off more vacationer dough, I don't like it as much. 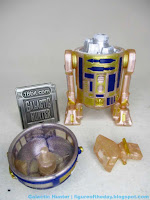 Early pictures looked yellow and blue - very IKEA or Ukraine flag - and dirty, but the actual product is a weird glistening rose gold body that's somehow also transparent. It would not be hyperbole to say "you don't have any other droids quite like this." The blue dome is also clear glitter plastic with lots of paint on it, so depending on how you hold this guy up to the light, you can see right through this figure.

The unpainted bits on the dome sometimes behave like light piping, which certainly glistens in interesting ways. The gold paint is also nice. There's a lot of painted blue and gold, and some of the latter fades in to the bare plastic color in spots. Some really pops. It's such a strange, gaudy figure that really does seem like something that would've been right at home out of a theme park's grand opening in 1972. It's cheerful and ugly, with plenty of painted panels on the posterior. A lot of figures have blank backs, so it's nice to see the pennies spent on deco with a design that doesn't look phoned in. But it does look like a glistening mutation of the 50th anniversary repaint of Cinderella's castle at the theme park. 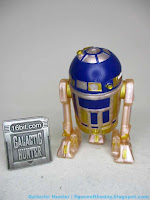 I assume the lack of a hat may have something to do with inflation and cutting costs, but I don't miss it. It's a nifty paint job and for $12.99 it's weird enough that I like it. It doesn't quite fit in the in-universe look, but he seems like a cousin to some of the better, metallic Glyos toys from Onell Design and I can't hate on that. If you have the means to get him for roughly SRP plus shipping, I'd suggest you do so. Since the droid has no reason for being, I like it for the colors and the audacity to do something that is, without a doubt, somewhat ugly. Shine on, you crazy droid.

Collector's Notes: I got this from Shop Disney.

This droid (and many others) should really light up. We have the technology. And who doesn't want to pay another $15 to see this little guy glow?

Was thinking the same thing as above Commenter. Prob wouldn’t be hard to customize