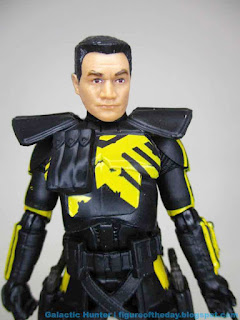 Bio: Entertainment Earth exclusive orange and black ARC Trooper from the game Star Wars Battlefront II. (There is no bio.) 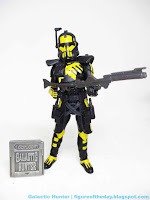 Commentary: This ARC Trooper (Umbra Operative) is an exclusive repaint - if you bought Jesse, Fives, or Echo, you'll probably recognize all the mold parts from those or other figures. They have the old bend-and-swivel hips, so the range of motion isn't as good as the newer figures, but it's pretty decent. You probably don't need more troopers, but black and orange, not-quite-Halloweeny looking figures work for me. (I admit, I haven't played the game, and since it seems to be DLC or a random drop it's not like I'd be able to get it anyway.)

Molded in black, except for the head, this is a pretty sharp figure. Under the removable helmet (with articulated rangefinder) is a Temura Morrison-esque head, this time with an improved paint job. Some earlier ARC figures had exaggeratedly darkened lips, this one doesn't. The eyes are bright, the subtle forehead wrinkles look excellent, and he just looks - for lack of a better word - very normal. This is the deco they should use from now on, unless they want to give him a wacky hair color or a scarred eye. It's great! The only downside is that the helmet is on the tight side - removing it will cause the head to pop out, so you may need to carefully pry it back out again. The helmet deco has a great orange pattern that looks a bit like a skull or a jack-o-lantern, so I really dig it. 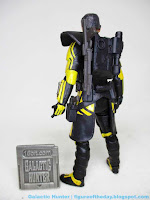 The body is good for a few years ago, as it incorporates elements of many ARC Troopers from The Clone Wars. This model has two pauldrons, chest armor, a Sandtrooper-like backpack (with plug for blaster), twin holsters, fancy boots, and generally excellent articulation. The kama/skirt blocks some of the hip movement, but plastic elements do that - and cloth ones sometimes look weird. Since I assume this guy will never pilot a toy starfighter, the plastic piece is perfectly fine. I had no problems getting him to hold or stow his weapons, but take note - the backpack slot for the smaller rifle is a little loose. It'll hold, but bump it and it might fall out. You won't want to lose it, so take care when playing with it, or setting up the display.

The paint is pretty good, the orange isn't super-thick, and brightly colored paints - orange and yellow in particular - sometimes looks a little worn over black plastic. It looks pretty good here, mostly because I'm a sucker for black-with-neon.

You might be a fan of the game and be familiar with the costume, but I assume most people will buy this figure because it looks neat. It's more of a designer art figure than it is reasonable camo for most combat situation, because I assume the only place where black armor with bright neon highlights would help you blend in would be an arcade or skate rink from 1992. Hasbro could make weird color Clones all day and I'm here for it - this isn't a boring figure, even if it is an obscure set of armor, and I'm happy to have it. It's also worth noting GameStop got a 6-inch version of this figure as an exclusive.