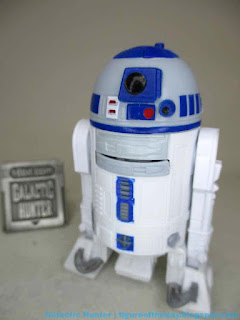 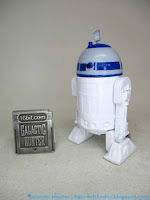 Commentary: I've been asking Hasbro for years to deliver unto us a cartoony deco Artoo-Deetoo action figure, and there he sits! Much like the 1985 version from Kenner, Hasbro just used an old mold (now 11 years old) and repainted it. This time around, Hasbro tried some new things - the drink tray is missing, and so is the lightsaber. And the drink dispenser. You don't get as much here, but it costs a lot more. That's progress? You also get a coin. We're absolutely being charged premium pricing for these guys these days, because a similar figure would've been $6.99 in 2007 - and making coins is pretty cheap, especially in bulk. But that's not the commentary we're making today - I just want to know if it's any good.

As a very long-time fan of the Droids cartoon, I'm mostly satisfied. We got a figure that takes design cues from the package artwork. That means blank white legs with molded wires, and grey boxes on the chest, and nicely detailed dome deco with no chrome to offend the eye. The blue looks good, the red light looks excellent, and the big blue circle on top is how the character design looks. It's closer to the Spanish PVC figure that you may or may not have also seen at Disney parks in the early 1990s. 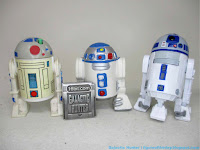 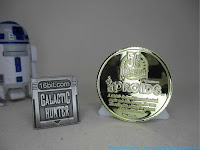 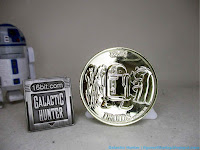 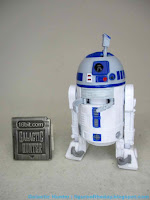 Tooling is nothing new - there's a hole in the dome for the missing drink dispenser, which is a pity because it would be fun to have had included. The opening chest panel doesn't like to stay shut, which is also a shame, but it does allow you to have a bonus play feature. Pushing up his central leg causes the scope to pop out, and vice-versa. It's a perfectly nice mold, but had they used the build-a-droid model I'd be just as happy if not happier. Maybe Disney can incorporate this deco into one of their future releases - I'd buy it. His rolling wheels are great, and it's nice to see an animated version of this figure on the market that doesn't cost ridiculous sums of cash.

I assume he's going to hit markdown, if C-3PO was any indication, but I'd say buy one regardless. I'd buy a spare on sale, but I'm very happy to have mine and I think fans of the old cartoon will be thrilled to own one after a very, very long wait. And if Hasbro ever feels the need to do a new cartoon sculpt, I'd also buy that. This is one of the few repaints I could never seem to get anyone excited about, so I'm thrilled it actually exists, but I would love to know who was the one who finally said "let's do it now."