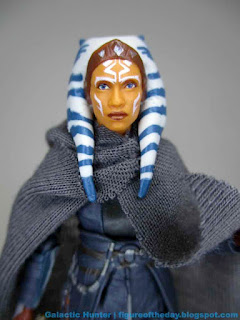 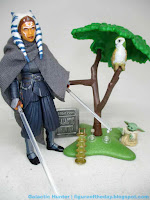 Commentary: We just looked at the Corvus version of her, which is basically the same as Deluxe Ahsoka Tano & Grogu. (We'll look at her little green friends later.) We looked at Ahsoka Tano [FOTD #2,927] a few weeks ago, and she's incredible - and skippable, if you decide to buy this Walmart-exclusive set. The very same figure with two lightsabers and a lot more, and for an extra $7. So what comes in the box to justify a 50% upcharge for a figure you just purchased last month?

The two clear colorless lightsabers don't bring anything new, but her lantern fits in her hand quite nicely. It's the long model with a shiny metal painted frame around a clear yellow core, and it's fine. It's the kind of thing you want in a set like this. The real highlight is Ahsoka's cloth cloak, which is cut very nicely with a thin fabric that hangs surprisingly nicely. There's a hood, and the fabric looks used, but not ratty. It's good. And I assume a fan-made garment would set me back at least $5 before shipping.

Hasbro has put out a few toys with bonus accessories at a higher price, like a recent Studio Series Transformers Starscream with a cape, a chunky throne, crown, and some other gear. It's $20 more than a regular Starscream - but if you look at third-party, fan-made (unlicensed) gear it's quite a bargain. Just the accessories would probably cost you more than that, and they'd be unlicensed to boot. The whole package is, arguably, a good deal if you were going to buy all that stuff... and a waste of money to double-dip if you don't care. Ahsoka is pretty much the same thing. If you just want an Ahsoka figure, she's perfectly good - but do you need two? Probably not. 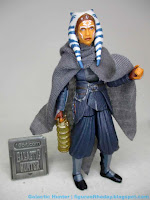 Since the unique Grogu is pretty cute, and the Morai bird is new and unique, and the shifter knob and floating Force rock are pretty cool, I assume you'd happily pay $7 for just those parts if a fan-made booth at a convention offered them for sale. I think they should be cheaper - this whole set would be great at $17 or $18, particularly since the gorgeous box (a waste of cardboard packed with lots of empty space) denies you a look at the toy you bought. If you're going to open it, it's great - because you can keep the box without ripping anything.

Had Hasbro thrown in a small toy tree or branch for the Morai, or maybe a plastic rock accessory for scenery, I'd say this set is absolutely worth the asking price. For those who want the very best Ahsoka figure, right now, this is it - she has the best articulation, the best likeness, the best gear, and two little buddies. If you don't have a live-action Ahsoka figure, and you open your toys, buy this one. If you don't open your toys, I might suggest buying it anyway because the retro box artwork - admittedly a little weird since they clearly went out of their way to leave text off the fornt - have lavish photography and presents the product in the best possible light. I don't feel ripped off, but if I knew there would be absolutely no difference from the regular TVC release I wouldn't have bothered to open the single-carded one.