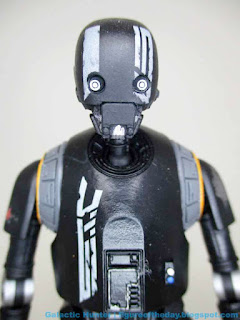 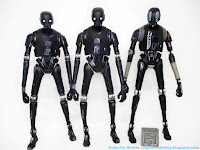 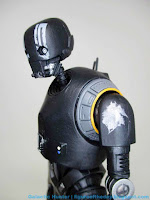 Commentary: Go back and read the above bio for K-7R1 up there, because they just told us that this robot exists as a dismembered pile of semi-aware parts in a Hellish liminal space on the cusp of the android equivalent of life and death, which sounds more than a little morbid. Just what the heck did this robot do? Does it have a bad motivator? Did it kill a dog? Being a pile of parts seems to be this guy's entire story, so there's not much to judge here beyond "it's a neat repaint of K-2SO" and "it looks pretty cool." 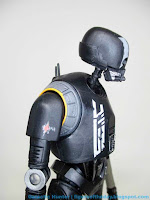 Back in 2016 there were two flavors of Hasbro's big K-2SO figures (one has red eyes) and now you've got one with a different black body. The figure stands just as well, with clear elements in the limbs to make it look hollow and a top-heavy build that will collapse if you aren't careful. (So be careful.) For the droid fiend, this is a must-buy. He can torment the Mandalorians, or stand around, or be dismembered I guess. Hasbro added some amazing scuffing and rusting, with little patches showing better-than-average faux wear and/or tear on this big Imperial stooge. Some gray plating on the forearms and shoulders set it apart a bit from the previous figure, with lots of grey markings on the face and chest doing the most to say "hey, this is different." 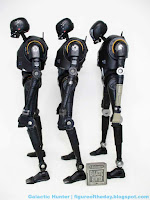 Since there's no character behind it, it's kind of useless and mostly just filler in a set that could've been populated by a protocol or astromech droid that looked a bit more distinct. The Disney or Lucasfilm people did a good job of giving us a robot that seems to have come out of the same factories as K-2SO, but I would argue this figure currently has no purpose beyond being collected or standing around. In-universe, it's debris - so a smaller figure that would be more likely to have a diorama may have made a better home for it.

As I said, "it's a neat repaint of K-2SO" and "it looks pretty cool." I prefer my weird robot repaints to be 3 3/4-inch scale so that they take up less room, but the robot fan in my likes it and as gift set filler goes, it's better than getting a third, largely unchanged K-2SO. (I guess this is some sort of collector Stockholm Syndrome.) If I ever got to a point where I had to pare down my 6-inch collection I probably wouldn't cry over letting this one go, but he wouldn't be the first on the selling block. Hopefully the design gets some use in a movie or streaming show, but I wouldn't hold my breath. If you're getting the set anyway, you'll probably like him just fine.