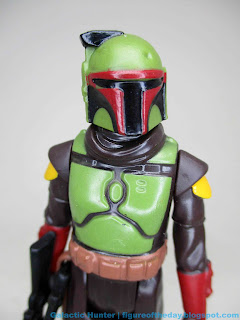 Bio: Boba Fett was a human male crime lord and former bounty hunter whose career spanned decades, from the fall of the Galactic Republic to the end of the rule of the Galactic Empire. (Stolen from Wookieepedia. Packaging has no bio.) 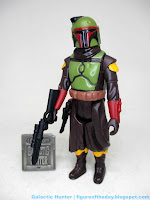 Commentary: I really love these Kenner figures. Boba Fett (Morak) is one of the more fascinating designs because it takes some elements from the original Kenner figure and slaps them in a new costume, but generally keeps the figure in the style of the originals. I like this figure a bunch and am glad Hasbro double-packed him in the case so you have a chance to actually see one and buy it if you like it. Also awesome, they updated the helmet sculpt from the 1979 original. These figures feel like honest-to-goodness time travel for me, and I assume your enjoyment of them will be higher if you're old enough to remember when collecting Star Wars meant flea markets or garage sales. There's sweat equity in my toy box. 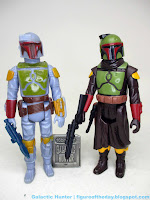 The original Boba Fett was neat because it was incredibly weird. It was based on the prototype suit colors and then got those colors wrong, it had the wrong blaster, the helmet was a bit off, but it was unmistakably Boba Fetty. The new one copies the basic pose, fixing the hands so both can hold blasters. The shoulder armor remains with no Mythosaur skull, which is true to the aesthetics of the 1980s. The figure has painted green armor - just like he fixed it up - which means he now has a green jetpack. What I love is the jetpack has a Kenner-esque rocket, but not an identical sculpt to the old rocket. The jetpack seems to be very similar to the original sculpt, which is a hoot since Hasbro updated the helmet to look significantly better (but still of the 1980s.) The rangefinder is up this time, and painted. It looks sharp. I love how the visor is painted, and that the red ring is painted all around the helmet this time. Deco is exactly what it should be, and that's pretty good for any Kenner figure. 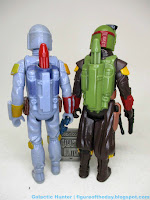 He stands, he sits, he holds his blasters. The loop on the holster can hold the grip of the pistol, and he does a good job fitting in a lot of the vehicles - but the arms are a little on the wide side so expect to do some squeezing. The knee pads are significantly lower - it's kind of weird - but other than that, it's Boba Fett. A figure being slightly off-model but recognizable is a trait of the original line. In some respects, you could Hasbro did us a disservice with the new blasters - by the time of Droids and The Power of the Force in 1984 and 1985, Hasbro tended to just reuse existing weapons and only tooled new stuff as absolutely necessary. Had this been a real 1987 figure, it would've probably just came with another Stormtrooper blaster. (I prefer the new guns, thank you.) 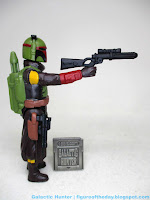 After ripping him off the card, I grabbed my old Kenner Boba Fett that I bought from my friend's older brother's buddy 35 years ago for $1, and handed the rifle to him. Morak Boba's gun is a great replacement for the stormtrooper blaster we had back then, and he holds it nicely. These new black accessory sculpts are pretty crisp, but much like Boba, the detail is a little soft. It's like they took a copy of a copy of a figure. If you actually own real 1970s and 1980s figures, the sculpts are simple, but not soft. Corners are very sharp, detail is excellent. Here it's rounded off and feels like the mold saw years of use before it pushed out the figure you just bought, which just seems odd. If you're not an old collector, you'll probably think this makes it look more authentic, so I won't fault you or Hasbro for that. The details are hard to get exactly right and as someone who has been involved with developing retro action figures, there are many arguments to be had. 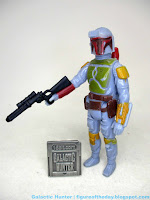 While you may disagree, I feel like this is an essential figure - "Boba came back from the dead!" seems like a concept right out of the 1985-1986 Kenner line extension, and the design fits right in with late-era Power of the Force guys down to the baggy pants cut down the middle. I love the upgraded helmet, I love the colors, and the accessories are better than I expected - he's right up there with Old Man Luke in Robes as "figure that's been in the back of your imagination since you were a kid." I might wind up liking The Vintage Collection NuFett more, but for now, I am very happy with this Kenner-style release and am just absolutely thrilled to have a wave of new Kenner figures with absolutely no vinyl capes to ruin the fun.