Star Wars Figure of the Day: Day 2,937: The Armorer (The Retro Collection) 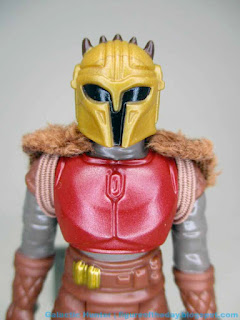 Bio: The Armorer plays a vital role in keeping the culture of the Mandalorians alive. She forges beskar armor in the ancient tradition of her people. (Stolen from the marketing copy. Packaging has no bio.) 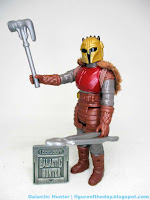 Commentary: I was surprised to get The Armorer in The Retro Collection for a variety of reasons - I love how she turned out, though! Back in the 1980s, Kenner, Hasbro, Mattel, and the rest weren't exactly packing their action figures to the gills with women. In Kenner's entire original run, we got Kea Moll, Sy Snootles, and Princess Leia. It's more than a bit of a surprise we got The Armorer along with Bo-Katan Kryze and Ahsoka Tano in a single wave, because we've not effectively doubled the number of women characters in Kenner-style figures.

The Armorer is particularly nifty because she has design elements that begged to be Kenner-ized, and others that made me wonder how they could pull it off. Her quilted gloves look a lot like elements of the old (also 1990s) Hoth Rebel figures, and look exactly like I imagined. The boots look good, the armor and helmet were pulled off well, and the gold helmet is a lot duller than I'd have expected. I would have anticipated vac-metal gold (which Hasbro avoids now) or something a bit more metallic, but there's not a lot of dull metal paint on old Kenner figures other than the Snaggletooth silver boots. She does have metallic gold paint on her belt, which is consistent with the older figures. Most figures had little or no paint on their belts, usually one paint application at the most. 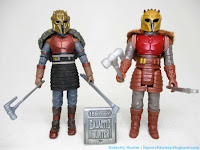 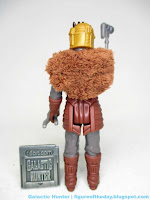 Other than her arms bowing out a little bit, the sculpt and pose seems spot-on with most of my old Kenner figures. She looks like she'd be right at home lurking near a Creature Cantina or Jabba's Dungeon. What's particularly interesting is how Hasbro tackles some design elements where there's no precise Kenner analog, in this case, her furry "cape." For The Black Series we got a mass-retail plastic version and an exclusive fuzzy cape, while The Vintage Collection opted for plastic. This Retro release has elastic shoulder straps and a fuzzy piece of cloth, and there's nothing like it in the original Kenner Star Wars line. We have some cloth cloaks, vinyl capes, a cloth cape around General Lando's neck, but nothing like this. I would've assumed Hasbro would have left it off (as was done with Boba Fett in 1978) or sculpted directly to the figure to keep costs and parts down. This feels very authentic for an old figure, but almost more of a luxury than what we used to see back then.

This line is a weird kind of time-travel for me - I remember seeing those last figures in clearance bins, mostly Duloks and Klaatu, for a couple of years after the lines died. I always thought it would be cool to see more figures, and this series is what I would have wanted for my birthday in 1987 had they existed. Given that The Armrorer is very stingy with her paint applications, she seems to fit right in with those old figures - but her hammer and tongs do seem a little big for the era, plus it's unlikely Kenner of the 1980s would have given many figures three additional accessories. Thankfully Hasbro did it, and plussed her up a bit - she's pretty perfect to me, and I hope they throw us a Paz Vizsla later. (And maybe a forge playset.) She's an absolute joy and I hope you find and buy her. But if you're not in your late 30s, 40s, or 50s, this style of figure may just be confusing. It means absolutely everything to guys my age who are me.

Email ThisBlogThis!Share to TwitterShare to FacebookShare to Pinterest
Labels: Mandalorian, The Armorer, The Book of Boba Fett, The Mandalorian (Streaming Series), The Retro Collection, Vintage (Kenner-style)

Didn't the Vintage Klaatu have a "furry" skirt?

Yes, but nobody had a furry backpack.