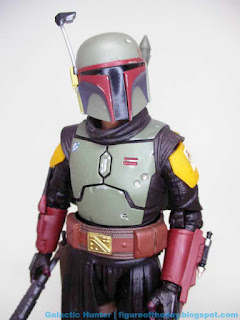 Bio: One of the most fearsome and capable bounty hunters in the galaxy, Boba Fett seemingly met his demise in the Sarlacc pit. A survivor, Fett lived to fight another day. (Taken from the packaging.) 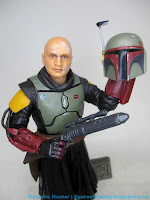 Commentary: We're in a weird era for toys, where we have a figure like this Boba Fett (Throne Room) in The Book of Boba Fett packaging despite it being based on his armor appearance in The Mandalorian. This sort of thing isn't uncommon - Kenner gave us our first TIE Fighter Pilot in The Empire Strikes Back packaging, for example - but it is a little weird given there are multiple trade dress color schemes so each figure can be as specific as possible. The Book version of Boba has different boots, different pants, different damage, and other small details - but that's OK, they're going to make that one too. This figure is closest to how he looks on Tatooine in the post-credits scene, which is also pretty much how he looks when he shows up in "The Believer." It's a good figure. 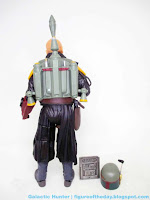 It's worth noting the outfit isn't necessarily consistent from shot to shot. He has visible ammo on his belt when he's piloting Slave I on those episodes, which could mean there are other minor costume variations depending on each shot. When I compare this figure to most shots on the show, he looks great - the armor dents are more or less painted as they should be, the dents are where they should be, it's colorful in nice ways, and all that jazz. One inconsistency I small - admittedly minor - is on his helmet's left-hand side, where the tip of the rounded part over his ear doesn't have the lighter color at the top. But it does have the marks, the articulated rangefinder, and other colors where you might want them. Similarly, the head under the helmet looks beaten and weathered, although not quite as much as the man on TV. I think it's for the best. 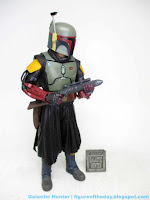 The armor itself is pretty good and probably why this figure has an upcharge. The yellow shoulders are separately molded pieces glued into the arms, and the red gauntlets seem to be molded in red plastic as well. I am unsure if this means they have some sort of gated tooling so they can pick which color(s) are which parts, or if they have to make extra steel molds for each color - either way, there's some added production and materials expense. Deco doesn't seem any fancier than your typical $20-$25 figure, and the boots are a little bland. Some dirt or painted soles would be nice. The textures are excellent throughout, with the black bits poking out from his armor , the pants' quasi-fabric, and the painted (well, unpainted) seemingly surplus Scarif Trooper gloves. I love the fake leather belt with its gold buckle, the holster fits the pistol perfectly, and the rifle... well, it was a fight to get it in his hand. I didn't like that. I also don't like that they skipped painting the tiny metal buckles on his shoulders. Given they painted paint flecks, it would've been nice.

What I'm not crazy about is that even with the improved elbow and arm articulation, and that awesome Hammer pants joint in the knees, the figure is a bit of a challenge to hand a rifle and pose with two hands. He can do it, but it's not simple. I realize some people really do enjoy the process of fussing with a figure to get that perfect center of gravity to ensure their miniature replica from a movie is absolutely perfect, but I came into Star Wars as a child and love picking a guy up, handing him an accessory, putting him down, and having a little fun. But, this is a collector figure - kids don't get a lot of figures anymore. I assume kids might dig this one because it is incredibly cool, and had Hasbro put out a ship or a throne or some other add-on for display or play, I bet people would be very motivated to buy some more toys for Boba the Fett here.

I've been starting to trim back on my 6-inch purchases not because I don't like them, but because there's just not a lot of action to have with these figures. (Vehicles, playsets.) I'm having a great time with the 3 3/4-inch guys, but as a figure to pose on your desk and generally fuss with, if you can swallow the premium pricing, Boba Fett has a lot of fun to offer. You can take off his helmet, the rocket comes out and you can pretend to "shoot" it, the alternate sidearm is a nice bonus, and if you had a throne you could have him throw Bib Fortuna's corpse out of it. I really like the whole "I'm going to throw the armor over my Tusken pants" look, and of the many revised Boba Fett costumes we saw used in 2020 and 2021, this is my favorite. I am unsure it's going to be worth the upcharge, but it's Boba Fett, so it will likely sell well and it definitely looks cool. Get it if you like the price.