Star Wars Figure of the Day: Day 2,952: The Mythrol (Carbonite, The Vintage Collection) 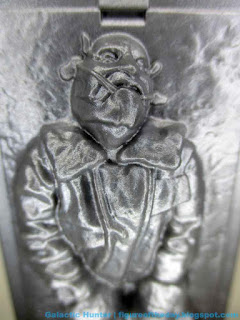 Bio: "The Mythrol" was a Mythrol male who worked for Greef Karga until he stole from him and fled. By the time he had a bounty placed upon him during the New Republic Era, the Mythrol was on the ice world of Pagodas, where he was harassed by a group of trawlers within a bar. After a Mandalorian bounty hunter named Din Djarin entered the bar and incapacitated the trawlers, he captured the Mythrol, later freezing him in carbonite before delivering him, along with others, to Karga, who worked as an agent of the Bounty Hunters' Guild, in order to collect the rewards. Karga later let him pay off his debt at work. (Stolen from Wookieepedia. There is no bio.) 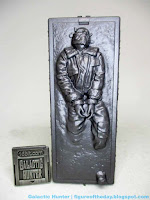 Commentary: "But is it a figure?" is a question that has come up at quite a few conventions over the years. This figure of The Mythrol (in Carbonite) was not solicited as an action figure, but it is a unique representation of a character which does exist in a 3 3/4-inch format, and in a distinctive form. Precious few figures get slabbed. There are three nameless ones that came in the set with Horatio Sanz plus there's a Jar Jars Binks and a few Hans Solo. Generally speaking there's something interesting about a Carbonite block as a toy, like stickers, or the ability to shove a Han figure inside it for play reasons. The Mythrol's block is just a block.

Unadorned, this gray silvery block looks great. It fits in the big Slave I storage area because it's smaller than the most recent Han Solo blocks, and it has a place on top for a claw to clamp on - which, admittedly, doesn't look as good. There's a hole in the back which I don't think presently serves a purpose, but it's on the back, so you don't see it. The toy has sculpted instrument panels on the sides too.  The close-up looks a lot like Shrek. 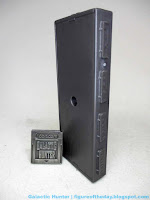 Unlike recent blocks, these ones are completely unpainted. A lot of Han Solo figures have some silver paint to separate the gas from the frame, but not this one - it's all the same color. Some have stickers, or painted lights on the sides. Again, not this one. You just get to enjoy the molded-in-color alien with some sort of snot or fluid frozen back on his face. It's striking, to say the least - it really captures how unpleasant the freezing process must be.

While arguably not an essential part of a complete figure collection, I would want these because they represent distinctive (and mysterious) characters. Season one of The Mandalorian was a fun ride because, much like the old movies, there's no guide book explaining who some of these people or things are. They just are. This character never got a proper name, and it's kind of a shame that the block wasn't an accessory with The Vintage Collection figure. But hey, we got it! And we got a claw on which to hang it, or you can shove it in the freezing closet! It even stands on his own thanks to the flat base! It can be found sold individually on eBay from the people who broke up the set to sell at a mark-up, which makes it easier to display than some of the Han Solo-popsicles from over the years.

If Hasbro did offer the block with the action figure it would likely command a Deluxe price point. Given that the Klatoonian Raider is being reissued on a card, Hasbro might allow something like that.

The three unnamed figures in carbonite are presumed to be the Rik Duel gang from the Marvel Comics Legends. Rik Duel, Dani, and Chihdo.