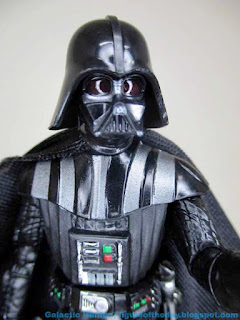 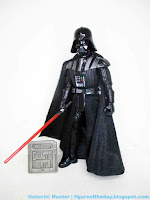 Commentary: Given how many figures we've had over the years, I was surprised that I could immediately see that Darth Vader (The Dark Times) was an instant and obvious improvement. We've had a lot of Darth Vaders - some good, some less than great. Hasbro has been making super articulated-ish versions of the Dark Lord of the Sith since 2004, with slight improvements - sometimes better elbows, sometimes better legs, and sometimes slightly better deco. And once in a while, a head that falls off. I would say that this is easily the very best overall Darth Vader figure that Hasbro has ever done in this size, which I assume means it's as good as we're going to get for a few years. (Unless there's a 40th anniversary Return of the Jedi one coming, of course.) 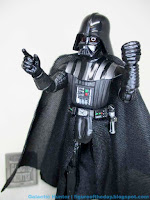 As far as I can tell this is an all-new figure with tons of buttery-smooth joints and excellent sculpting. There's no weird ratcheting, there's no finicky fidgeting. You just move the part you want, and it stays. The head is capable of subtle nods, the torso has a ball joint so you can actually adjust his posture. The deep cut elbows are there so he can gesture menacingly, and you have bend-and-swivel wrists on his open hands and optional fists. I love the range of motion on the ball-jointed hips - thanks to the cloth robes, they're not restricted - and they swing forward easily. On top of that, you get thigh swivels and bend-and-swivel knees. Also rocker ankles. I should also note the shoulders are a new configuration - the shiny shoulder armor is molded to the chest piece, which looks pretty good and allows the actual arm piece a bit more movement. It's not what I expected them to do, and it's not how they usually do it, but it both functions well and displays nicely. It's interesting to see them take liberties with how the costume is built to make an overall better plastic figure experience.

I love the deco - the face has numerous subtle silver accents that bring out the detail on otherwise dark plastic. The painted tips on the mouth are good, the glossy red eyes are great, the only thing that looks a little sloppy are the extra silver around the "coin slots" on the chest computer. There's a lot more going on here than the average Vader figure, especially when you compare him to the virtually unpainted earlier figures that enjoy a little bit of gloss on the boots and a chest computer, and not much else. 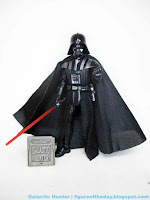 His accessories are good - the hilt plugs in the belt, the lightsaber fits in the hands, and you can kind of get both hands on the hilt without too much trouble. His alternate hands are great for gesturing, too, and the kind of thing we very rarely get at this scale. Hasbro definitely went the extra mile here. I'm less keen on the cape, which doubles-over on itself and is open on his right-hand side. If positioned correctly it looks marvelous, but it can also look really weird if it's off a little bit. I'd have preferred they sew or glue it shut somehow, or perhaps have the opening directly behind the figure so you can't see the seam. Having said that, it's nice to have a cape thick enough to not see through, and the inner cape around the legs is just fine.

Given the price increases - we went from about $10 in 2010 to $15 today - you may be saying "this is highway robbery!" Inflation on the 6-inch figures has hit to the tune of about 25% in just a couple of years, so a 50% increase over a decade ago for the little guys sounds hard to swallow - but the figure is significantly better than Hasbro's previous best. The range of movement is better, it's easier to swing his legs to fit in a ship, it's not too hard to pose him so he won't fall over, and you get a little more gear than before with more pieces used to make the figure and more paint apps. If you are looking for the very best - this is it, right now. I would have loved a swappable damaged head or damaged chest computer, but I assume that'll follow later. For now, this is the best deluxe Darth Vader figure money can buy at this - and arguably any - Hasbro scale, and I think it's well worth the current asking retail price. I wish it were cheaper, sure, but at least it doesn't feel like anything was left off the table that wasn't a spoiler. If you are looking to upgrade your favorite Darth Vader figure, perhaps consider shelling out for one of those.