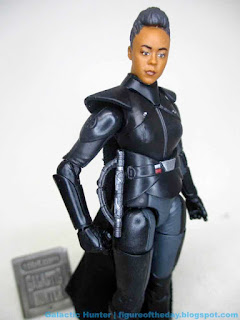 REVA (Third Sister)
The Vintage Collection 3 3/4-Inch Action Figure
Item No.: Asst. E7763 No. F4476
Manufacturer: Hasbro
Number: #242
Includes: Double lightsaber, half lightsabers, hilt
Action Feature: n/a
Retail: $14.99
Availability: July 2022
Appearances: Obi-Wan Kenobi
Bio: Reva Sevander was a human female Force-sensitive who served as a member of the Inquisitorius under the title of Third Sister during the early reign of the Galactic Empire and briefly held the position of Grand Inquisitor. (Stolen from Wookieepedia. There is no bio.) 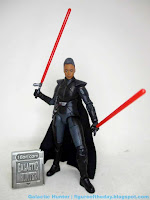 Commentary: Love her or not, Reva (Third Sister) is another great figure. As one of the series' three leads, Reva took a costume that looked good in the cartoons, looked OK on the live-action show, and translated into something that makes a tip-top action figure. There may be design quibbles, but unlike Darth Vader I don't have four decades of history with the character - the figure looks like the Reva I remember seeing on screen. Given that the costume looked kind of like an action figure, it helps that the action figure just happens to look exactly like an action figure.

Moses Ingram's face is captured well as a tiny piece of plastic, with pretty good hair. Getting the fine detail in the sides seems like a challenge at this size, so I'll say it's good - but not exact. There's also a ponytail, and it looks pretty great. The face also looks pretty much exactly like you want. 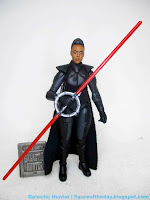 The armor doesn't look exactly like the show, but it benefits from this in some respects. The boxy silver pips on her armor look more like dots at this scale - I don't like that - but I do like the glossy black shoulders, even though the costume on TV looked significantly less glossy. It's a design choice - the shiny texture looks more like Darth Vader, and the flatter black on TV looked more like McQuarrie concept art or something from Rebels. Everything else looks pretty great - her cape hangs well, I love the fact that her arms have good elbow joints that bend nicely, and her lightsaber hangs well from her belt. This surprised me since Hasbro doesn't always get the peg size right, and given the odd shape of the hilt it's a bit of a shock that it just plain works. The legs move well - just like Bo-Katan Kryze, Fennec Shand, and other recent releases - meaning this is one of the very best engineered figures in the entire 3 3/4-inch toy pantheon.

It's good that a lot of these new character figures are generally fantastic from their first release, because I would wager it's unlikely we're going to get a second without a new appearance in a new costume. (Of course, a Kenner-style one should be around any minute now, and I'm looking forward to that.) A redeco to better match the show would be nice, but I don't know that I want another same-but-different figure when this one is just fine by me. The only place she comes up super short are the wrists - they just swivel, there's no bend here. But at least you get a nice suite of accessories and a great cape, with perfect articulation that you would totally use with a vehicle if one existed for her to use. I doubt we'll get one - but at least you won't be left complaining that her figure isn't good enough. It's great. Collector's Notes: I got mine from Entertainment Earth.

I'm trying very hard to limit my collecting to the OT. Figures like this aren't helping!