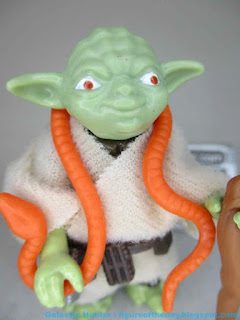 Bio: Yoda, a Force-sensitive male being belonging to a mysterious species, was a legendary Jedi Master who witnessed the rise and fall of the Galactic Republic, followed by the rise of the Galactic Empire. (Stolen from Wookieepedia. Packaging has no bio.) 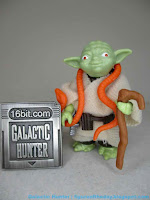 Commentary: I waited to review Yoda, a 2020 reissue of the 1980ish figure, because I assumed we'd be getting a second hit of them through Walmart or a rerun through other channels. We didn't - The Empire Strikes Back wave of Kenner reissues was hot stuff and in short supply, much like Star Wars figures were at Target. Hopefully things are smoother for Return of the Jedi. The bulk of The Empire Strikes Back wave of figures go for above SRP, but you can get Lando for below retail on eBay. Boba Fett and Yoda cost way more than they should - hopefully Hasbro will consider reissuing them, perhaps on variant cardbacks like in the old days.

But how is Yoda? Pretty good! Not all original Kenner figures were great at holding their weapons, and some of Hasbro's reissues - lookin' at you, Han Solo - just plain do not want to hold their blasters. But Yoda? Yoda works. The hand can hold the cane, the snake fits on the neck, the robes fit, the belt fits nicely, everything is good enough that this Yoda - done in the colors of the lighter-skin, orange snake variants - pretty much looks like the ideal version of the figure in your head. If you actually had the luxury of seeing him on a store shelf, you'd buy him - $10 for a 1980s-style Yoda is a steal, even if you just bought the figure and stripped him of his accessories to give your old, much-loved, accessories-lost figure from childhood. He has the jointed neck, arms, and legs just like the old days - and the wild eyes and goofy smile, too.

Under the robes he's a little more different - the painted arms are lacking in wrinkles and much glossier. The sculpt in general seems very smoothed out - something you'd notice comparing him to an original, but those of you who don't own one or have never seen one could easily confuse this for the real deal. Thankfully he has numbers stamped on his feet to indicate he's a modern release, but it does go to show that Hasbro can make a Kenner-style-figure look and feel almost like the genuine article when they put some work into it. My Yoda's ears were a little bent in the package, but he's a pretty perfect recreation as these kinds of things go - the lighter eyes, the paler skin, the orange snake, it's all here and he is the sort of thing Hasbro should have made in much greater numbers.

Due to the demand for this reissue, the price on eBay and Amazon is a little high - you can get an unpackaged Kenner original for about the same price, roughly $50. For that reason I wouldn't suggest paying current secondary market prices for the rerun, but I would suggest Hasbro rerun all their old Kenner figures to meet demand. Or at the very least, Yoda, Boba Fett, Darth Vader, and Stormtroopers - the interest is there, and it would be a great impulse/Father's Day assortment. If this figure ever shows up again for $10, I'd strongly suggest picking him up. He's a keeper!

Collector's Notes: I got mine from Walmart through my pal Scott "ToyGuru" Neitlich! Did you see his new Spector Creative YouTube channel yet? Click here.