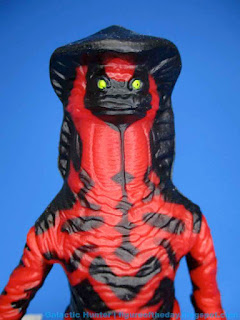 Bio: The figures are moulded colour plastic, they are factory made and professionally painted, these are not 3D printed. (Stolen from Stan Solo's web page. There is no bio.) 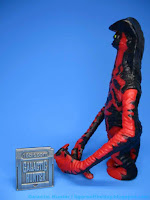 Commentary: Back in the 1990s, Kenner was weirdly OK with talking to random young fans (cough) and I remember one employee look at some Galoob stuff - specifically a green A-Wing Fighter Action Fleet ship - and turn to me and say "If we did something like that, the fans would kill us." The implication being action figure people hate weird repaints, but with Amaulman I went from "that's dumb" to "give it to me" in short order. The figure's mold is copied from the 1984ish Amanaman from Kenner, with minimal changes. The arms still swing up and out, and the legs still roll forward just like the original. He stands, he can't sit because of his tail, and he's very wrinkly. Figures like this were superbly awesome, showing a tantalizing departure from the norm of that era with true-to-the-movie sculpting that looks significantly better than most of the human counterparts of the era. When Hasbro did another Amanaman in 2001 for Power of the Jedi, I appreciated the improvements but I was still quite happy with the old Kenner mold. (I dare say Hasbro should just reissue all of these with minor alterations.) 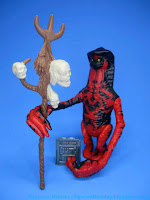 What makes this figure interesting - and a custom - was the decision to change yellow to red, green to black, and added yellow Sith eyes and tons of tattoos. The figure itself feels just like my old Kenner one (but the staff doesn't - more later) and the new colors easily obfuscate any mold changes. I couldn't find any identification markings on it, so it's obviously not an original, repainted figure. But I was taken by the goofy tats, the beady yellow eyes, and the mouth - now painted in black, looking vaguely like a duck beak. If Hasbro made this exact figure I bet a lot of fans would be upset by it, but it's a heck of a lot more interesting than carbonized or credit collection figures - it's weird, it's colorful, and it's striking. And it's not out of place with the old figures other than maybe, just maybe, the original figures wouldn't have this many painted tattoos on them.

The staff, at first glance, looks like an original. That's good! When comparing it to an original, it doesn't - that's better! If you don't have an original you may not ever realize this is different. Some of the painted skull detail isn't quite as precise, but it's good - comparable to other figures from that era. The skull detail is a little softer or a tiny bit off, and the various detailed grooves are a tiny bit different. The brown plastic is a bit more flexible, but not rubbery, with a finish that's less glossy. It would be nice if it was marked as a new one, just so it was obvious, but that's arguably a pro - it's so good, you probably won't care it's a) a tiny bit different and b) not an original. I would have appreciated deco changes to distinguish it from Amanaman's staff, but hey, it's here. He holds it awkwardly, but the original figure barely gripped his accessory too. It's every bit as good as the original, which is to say, it could have been engineered a little bit better back then. 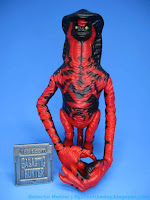 It's expensive for a copy, but it's a very good and very weird copy. I assume a few dollars goes from every purchase goes into a rainy day fund just in case someone tells the producers to stop making these. It's not worth the current asking price of $45... unless you really love this kind of figure. I was thinking it was absurd to pay, then it hit me - I was paying $30-$40 for Carbonized repaints I didn't like of figures I didn't want, so shouldn't I just put the money toward something I actually like? And I have to say, doing this has been a lot more fun than just absorbing yet another (but sparkly) figure from the Disney era. No hate against the Disney era - but I'm old, and I vastly prefer toys I can play with over tiny statues or maquettes I can pose on a shelf and then pray don't fall over.

Collector's Notes: I got mine from a seller on Etsy.