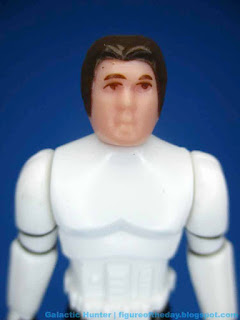 Bio: Han Solo in Stormtrooper Outfit custom figure. The blaster and helmet are reproductions. (Stolen from an eBay listing. There is no bio. Figure was sold on reproduction packaging or loose) 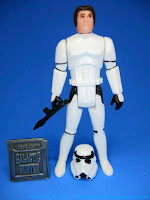 Commentary: As a kid I had a custom Han Solo in Stormtrooper Disguise, and back then you could either get one made of a decapitated Power of the Force Stormtrooper Luke, or one made from 2-3 figures - a Stormtrooper would get cut up for the body (and helmet), and a Han figure of your choosing for the head. None of these were great options - the helmets didn't quite fit, and the work was clearly the work of a craftsman doing their best. Enter Smith Lord Creations in 2019 - someone said "hey let's just mold our own (and also make reproductions of real Kenner figures)" rather than hack up rare figures from the 1980s. I'm still not entirely sure what to make of straight-up reproductions, but I do appreciate it when you can easily tell they're fakes. Since this one never existed in the old days, determining a forgery isn't a lot of hard work.

Han looks like the real article, and feels like the real deal, but doesn't quite play perfectly. The figure seems born from a tweaked 1985 Stormtrooper Luke figure, with a new smaller Han Solo head. (Mine had misaligned facial paint - it's a bit ugly.) The arms and legs move just like a real Kenner figure, with details that are nearly perfect copies of original figures - but are not as crisp. There are no copyright markings, and the legs are spread out a lot, but this figure absolutely looks like a lost Kenner release. The head won't turn, but the hair looks like something Kenner would do and the head is small enough to fit under the helmet. If you put this in a faked old toy catalog or in a figure display, it passes for a genuine Kenner product with minimal black paint. The eyes and hair are painted too, and even off-center it looks like something I had as a kid. While he is a little short for a Stormtrooper, he's standing next to my 1983 Jedi Knight Luke Skywalker figure, an old Bossk, and 2022 Kenner-style Ahsoka and Bo-Katan and he belongs.

The figure is good - the accessories are notably different. The clip on the Stormtrooper blaster has an indentation on the side, so it doesn't look exactly like an original. The grip has a slightly different pattern on it, and the plastic's look and feel differs slightly from Kenner originals - but if you don't have any, you probably wouldn't realize it. It would have been nice to have an "R" molded on it somewhere. Due to Han's hands, the figure has difficulty holding the blaster. You might be able to wedge it in his hand and rest it against the bowed-out legs, though, so it makes a good display piece. 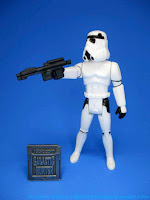 The helmet isn't fooling anybody, because the paint is a little weird and it doesn't quite fit. It feels like an old Kenner helmet, but the paint is pretty dreadful. The details are soft and paint is glossy and outside the lines, giving it the feel of a knock-off Ben Cooper mask. It's a Stormtrooper, and all the elements are there, but it's ugly. It also doesn't fit straight on his head - he can wear it at an angle, but it doesn't fit if you want him looking forward. It either tips up a bit, or looks off to the side - but it looks fine in his hand, or at his feet. Again, as a display piece, you can probably make it work.

This was one of the first figures from the team that broke up that was once Smith Lord Creations (who still makes stuff without Stan Solo) and the effort to make one of those figures Kenner left out is amazing. This is a stellar fan-made release, but it's still an unlicensed figure that doesn't have the best interaction with accessories. It's a neat bootleg you'd probably want because there's no better official alternative. If Hasbro ever made their own, it would probably put this "custom" in the curiosity bin or junk drawer. Maybe. There are also "custom" Grand Moff Tarkin figures and while I prefer Hasbro's, somebody is buying the fan-made ones. It seems absolutely silly to have paid $40 for this guy, but I did, and I'm happy with it. It looks decent - it's just not a great toy. I would love to see Hasbro make their own 1980s-style Kenner-carded Power of the Force Han Solo Stormtrooper figures, and I for one would happily pay $16 if it means they threw a coin in there. And of course, if they could ensure the helmet actually fits.

Custom figures like this aren't toys for kids, and we don't really know what kind of testing they went through. As far as we know they're not authorized unless there's some wink-wink in the background, and I have no idea if they came out of a factory in China that also makes other companies' officially licensed stuff - but the look and feel is excellent. If you stumble on one, and if you're finding yourself to be over 6-inch figures or the endless torrent of stuff in the original trilogy timeline but not from any of your favorite old movies, give this a shot.

Collector's Notes: I got mine off of a guy on eBay.

FYI, I tried emailing a Q&A to adam@galactichunter.com this morning (9/19/22) and got a "Permanent Error" message back. Might be worth checking into if you're not getting questions.

As for Stormtrooper Han, the helmet is pretty ridiculous but I'd have been thrilled to have it back in the late 70's, early 80's. He definitely needs a black dickey, though.