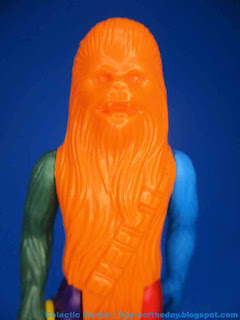 Bio: This Chewbacca figure is inspired by the colorful prototypes that enable the development team to look past the deco and focus on the sculpt, analyze mold alignment, and adjust for quality. (Taken from the figure's packaging.) 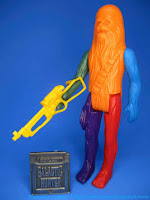 Commentary: While not essential, few would argue that the Chewbacca (Prototype Edition) isn't an amusing idea. Personally I'd rather they just keep regular plain brown Chewie in circulation at stores for people to just impulse buy it and start collecting, but these sold-out-almost-immediately fake prototype figures do well. With no paint and no new tooling costs, I'm sure it's a profitable endeavor for Hasbro and Target, too. (Although why the next one is a 2020 Snowspeeder Luke, I have no idea. I'd bounce out of bed to get a shot at a Luke or a Leia.) 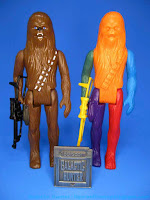 There are six flavors of this figure, and mine is the orange body version with a yellow bowcaster - I got a second on in another color, but it's remaining carded for now. I like this one a lot - the bright orange really highlights the grooves used to make fur for kids back in 1978. The unpainted face certainly tones the fangs down, and the striking blue and white eyes are absent. On the other hand, it showed the bandolier with the raised "straps" lacking in paint to distract you from the simple pattern, and the hair on the arms and legs of your now literally green-limbed Chewbacca look great too. His pouch and everything looks more or less like you remember it, were it molded out of a box of Crayola crayons.

What makes these figures particularly intriguing is the accessories - a yellow bowcaster is an amusing new thing, just like being able to get new colors of official lightsabers to go with your other figures. If you want a green one, it exists now - or purple, or blue. I like the bright yellow because I can see the sculpted detail on the sides I took for granted since I got mine a million years ago. It is much easier to see the scope on top, plus some greebles on the side. As the fourth character in this series, each with six or more colorways, I am surprised Hasbro has not done solid color re-reissues, and that Diamond/Gentle Giant never did multi-color figures like this. I wouldn't want one of these for every single figure, but if Hasbro continued to do 1-2 per year, and/or finish the original 12, I'd be pretty pleased. 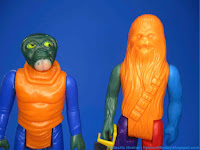 Hasbro, if you're reading, an unsolicited request for 2023 - rerelease regular Chewbacca (and all the rest that you can) as store exclusives or main line items on Return of the Jedi cardbacks. A lot of people will buy these if they see them in person. I dare say they're impossible to resist when you see them in person, plus impulse buys are how collections begin. Chewbacca was sold at the Entertainment Earth/Target booth at San Diego Comic-Con, and followed in Target stores a few days later (after a long online pre-order gestation.) According to my store trackers, he sold out almost immediately in my area - but if I want to drive an hour, I could've found more. I think the runs are too low, but this kind of figure probably should be low-run - the wacky colors are a fun item for collectors who already have it all. I'd love for the masses to just be able to waltz into Target and grab a Chewbacca - and hopefully be inspired to pick up The Black Series or Hasbro's new Disney+-specific The Retro Collection figures. Or some new Original Trilogy The Retro Collection figures. (If Hasbro made more of those I'd probably give up collecting most if not all non-Star Wars toys.) (Except maybe other 3 3/4-inch figures that fit in with them, lookin' at you Healey Made and select ReAction figures from Super7.)

Collector's Notes: I got mine at Target.