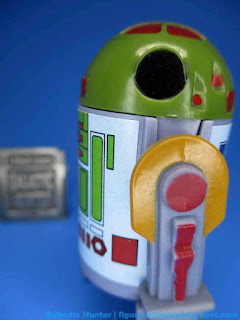 Bio: This is a complete made up custom. The figures are moulded colour plastic, they are factory made and professionally painted, these are not 3D printed. The figure has SS stamped on the inside as this is a complete custom figure. (Stolen from Wookieepedia. There is no bio.) 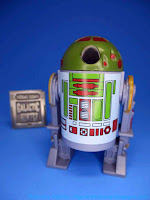 Commentary: I never thought I was going to review a "bootleg" here, but the lack of any written reviews about them (and my general disdain of being asked to watch a YouTube video for a simple "is it good?") changed my mind. If you like Kenner-style figures, you're going to like this one. You might not like the price for B0-B4, but it absolutely looks like something Kenner should have sold you in the years between trilogies if they kept making toys.

I picked up a few of these Stan Solo figures recently after generally ignoring the third party/unlicensed world, and since I heard they were good I wanted to try them out. By and large, this was not an exaggeration - they're not exactly like the ones you had as a kid, but they look and feel as good as the reissues we've been getting from Hasbro. I got a kick out of B0-B4 because I love droids, I love toys painted to look like old Kenner Star Wars figures (specifically ones from 1978-1979.) In terms of ridiculousness, this thing is great. Sure we know Boba Fett employed BL-17 in "A Race to the Finish," an episode of Droids that has all the best things in it. An Imperial Shuttle, Boba Fett, Vlix, the White Witch... but we never saw Boba Fett actively pal around with a robot friend. Figures like B0-B4 feel a lot like something Kenner would have pitched to Lucasfilm to give the toys a Robin to Boba Fett's Batman, but would probably never approve. This makes it a perfect - as these are often billed - "custom action figure," and this particular figure would likely never be something Hasbro made and sold.

It's molded in blue like Kenner Boba Fett, with a molded green dome and a sticker. The legs move just like the old Kenner figure, and have a little give to them. The body is the R2-D2 Pop-Up Lightsaber format (used in The Power of the Force and Droids) with a 1978-style clicking, gimmick-free dome. There's a unique sticker that replicates the basic form of the R2-D2 label. The back of the figure has panels painted to wink to Boba Fett's rocket pack - you can see a red box standing in for the rocket and some blue panels that match the backpack. The figure has a lot more deco that R2-D2 - added red panels on the arms are joined by yellow "pauldrons," plus the dome has some added yellow markings to match the movie prop helmet. I can't find any markings indicating its origins on mine. 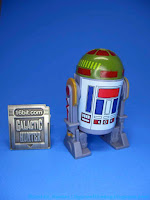 He doesn't do much - the dome clicks and rotates, and there's an optional $13 third leg you can buy. The clicky dome doesn't sound exactly like an original R2-D2, but it's close - and considering this guy did it during a period where Hasbro seemed like they would never get to R2-D2, I have to give him points for trying something weird. The B0-B4 concept is not unlike what Disney did with its Ahsoka-ish R7 droid, or Hasbro's Darth Vader and Mace Windu-inspired droids from around 2006 and 2007. I assume that Hasbro is unlikely to do anything this whimsical with its Kenner-style figures, but if they do, I'd buy.

I can't say this is worth the asking price. It might be a very good deal, I don't know what factories were used, or how the heck they can make something that looks and feels so close to the genuine article. If Hasbro made this exact figure for $40 I'm not sure if I'd begrudgingly admire their bold insanity and buy it, or rage quit. As a bootleg, it's very expensive. But as a "custom figure," it's very cheap. If you're not collecting modern Hasbro figures and only want vintage - and I mean real vintage - this is something you'll want to dip a toe in and try. If you're happy with The Vintage Collection and Black Series, you have no real reason to play in these waters. I generally prefer figures that are toys over figures that are collectible - so I'd love to see a lot more just like this, and will review more here for an all-retro themed September.

Collector's Notes: I got mine from a seller on eBay.