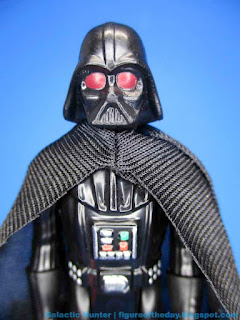 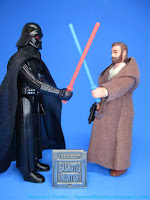 Commentary: I have been playing with my original Dark Lord of the Sith toy I've had for a very long time, so I was ready to examine this Darth Vader (Dark Times). In trying to make a figure look like the simplified 1970s toys, it over-smoothed the details and gave him an open left hand (rare on the original figures if they only include 1 accessory.) The funny thing is that the most "Kenner" thing you could do would be to rerelease the 1978 figure on a cardback with no changes. The second most "Kenner" thing you could do would be to take the original figure and update it in one or two spots - say, replace the telescoping lightsaber arm with a standard grip hand, and maybe give him a cloth cape, and then call it a day. This is a new sculpt, and he looks undercooked in spots. 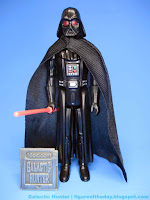 The engineering is very much what I wish I had as a kid, because the telescoping lightsaber and vinyl cape got in the way when it came time to play with vehicles. In this case, you can just easily remove the weapon and the cloth cape tucks under his legs nicely. The basic form is similar to Darth Vader 1978 with a slightly meatier build. OG Darth Vader had thinner shoulders (hidden by the plastic cape) and skinny legs, while this one adds the "skirt" that beefs up the legs pretty well. Unfortunately it also completely saps the toy of sculpted detail, as the plastic "skirt hides where the stitches in his leather legs would go. The shallow grooves are still there, but mostly hidden by that skirt - and on the arms and chest, he's similarly shallow. The glove sculpts are smoothed out too, making the figure look like it was made from a copy of a copy of the mold. The area around the chest was left flat, ignoring the stitching of the 1978 original, plus Hasbro added a codpiece that was missing from 1978 - which causes the figure to have less texture down there. It's unmistakably Darth Vader, but even the helmet has a smoothed-out level of detail that almost looks like a flea market bootleg. The old Kenner toys were surprisingly crisp - if you pick up an old Hammerhead or Walrus Man on the cheap, even those rounded, organic forms have pretty nicely defined veins, wrinkles, or other sculpted details. If you told me that someone at the factory was sent an early .STL file before the final details were approved, I'd believe you - and I would consider elbowing Hasbro to sculpt these retro guys using retro techniques, like wax or wood first. The poses tend to be less sterile. 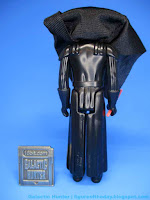 The new Darth Vader uses a non-telescoping Kenner lightsaber for the first time. Fans have made unlicensed reproductions of Luke's lightsaber in red for years for a couple of bucks, so this being the first official Darth Vader lightsaber in this color is kind of neat. Similarly, the cape - which is a little much around the neck - is cool to have in this form. I was expecting something a little more like Lando Calrissian (General) with a meatier weight, but this is good too. It also has a much more complex cut than what I was expecting, which would have been a simple piece of cloth. As accessories go, this set is what you expect of a figure made during The Empire Strikes Back or Return of the Jedi eras. 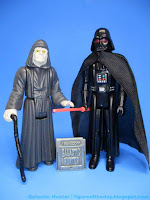 I love the build quality. The joints are nice and tight, and he has a good center of gravity and won't easily topple over. His arms swing perfectly well, the red lenses of his helmet look great as you twist the helmet around, and he has no problems holding his blade or sitting in the vehicles I have around my desk. The paint on his chest is slightly better than the 1978 original, and I do have a soft spot for "wrong" when it comes to details on 1970-style toys. The toy has a much better silhouette than most Vader figures, and he's skinny enough to read as "Kenner" on a shelf of toys. 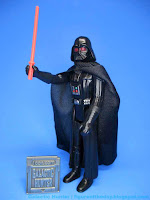 While I prefer the depth of details on the original 1978 mold (and his remakes), this Darth Vader is likely a better toy. Having both hands able to grip an accessory means he can "use the Force" and steal blasters. He's ready for action in vehicles or playsets without having to consider the vinyl cape creasing or needing to be removed. Hasbro did a nice job with every aspect other than the too-smoothed-out sculpted details and blank spots - and for fans who never open figures, they won't notice. I nitpick because I love, and I wish Hasbro would call up fans for details like this to take them from "good" to "spectacular" with minimal differences. I just wish they aesthetically matched the original toys a tiny bit more - but they got the form factor down! For $12 I'd even consider buying another one. He's hanging out in my MTV-7 with a very old Firestar-I pilot on my desk right now, and everything looks like it more or less comes from the same era. That's high praise.

Confidential to Hasbro - I would buy a reissue/variant of this one in slightly different deco. Use the 1978 Kenner-style white and red chest paint, leave the red off the helmet, and maybe make the gloves a little more consistent, retool the chest, and I'm in for another one.