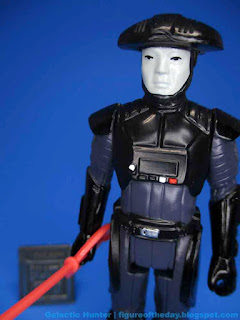 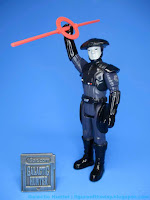 Commentary: This is a good one. First (or last) seen on Star Wars Rebels, Inquisitors like the Fifth Brother got toys as 5-jointed figures a few years ago. The first Fifth Brother [FOTD #2,271] was in 2016, and this new one is somewhat similar. What's weird, though, is how this figure adopts aspects of that cartoon-style figure, and also how that figure seems to have worse paint than this 2022 faux Kenner one.

The figure is dynamite, giving us something that feels old with two exceptions. Well, maybe three. There are red lights on the back of the hat which I feel Kenner would have left off, as Hasbro had no such details on the animated Fifth Brother. The Imperial cogs on the shoulders are perfect, as we've seen on modern figures since the TIE Fighter Pilot in 1996. But the 1980s figures had an ugly weird little cog that wasn't quite on-model, which would have been preferred here. And third, arguably, the chest lights on the armor are too good and plentiful - I feel Kenner would've not bothered to paint them so well. But those are nitpicks - this is a good figure. If Kenner did it, the figure might be entirely black with no gray areas on his limbs or torso. 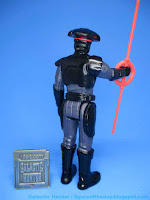 He has no problems standing or sitting, the limbs swivel nicely, and the hand can wrap around the big red lightsaber. Like old Kenner lightsabers, it's unpainted. What's hokey - and I kind of love it - is that it's rounded and has hints of being detailed like the prop on one side, but is completely flat and almost unfinished on the other. I admit, I laughed when I saw this. The design on the grip has the three buttons on either side we've seen since 1980, and I appreciate the attention to that specific detail. They could do something new, but keeping the same basic look grounds the accessory. And I hope you like it too, because the Grand Inquisitor has one and Reva's is pretty close to identical. (Kenner would've cheaped out and reused the same one three times. Just sayin'.)

The figure departs slightly from the show's costume, which is what makes this figure go from "fine" to "fun." From the Cantina aliens in 1979 to Lando's wrong-colored uniform and cape in The Power of the Force, Kenner would sometimes pick their own color schemes. The Fifth Brother's isn't weird, but most photos of his live-action costume are black while the cartoon is black and grey. The Kenner-style figure seems to use the cartoon coloring with slightly more gray on his outfit. The figure's got gray upper arms, and I'm here for it. He's also missing some of the lights from the belt and chest armor, as he should - Kenner wouldn't have budgeted for it. Depending on the reference it's hard to tell the precise finish of the armor and hat on the TV show, but the figure goes for glossy black - and it's not glossy black on the big screen. I have him standing near a smattering of old toys, and he really does seem to fit in with the nifty coloring... even if Kenner wouldn't have made it glossy. This figure looks cool. 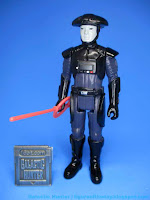 I also like the face. It The head swivels nicely, the black eyes and eyelid were painted cleanly, and the pale gray skin is great. When combined with the hat, you have a figure that has a distinctive silhouette that somehow reads instantly as being of the Empire and adds to their legion of distinctive headwear. While the rank and file hats have always been fun, some of the Inquisitors have fun ones and the Imperial Dignitaries win the prize.

The Fifth Brother would go great on any vintage Star Destroyer or Death Star you may have, or maybe a new one, some day, in our dreams. I think this is the strongest overall figure in the Kenobi wave, and this is the first one you should buy if you're an old guy with old Kenner figures in a box in the closet. He just feels more like an awesome toy you should have owned as a kid, rather than something trying to recapture the glory days. He also looks like he was born to play in your old Kenner Mini-Rigs. Great job, Hasbro, thanks for giving us a cool new figure where everything just works and there's no offensive vinyl cape. I guess we'll get into those next month.