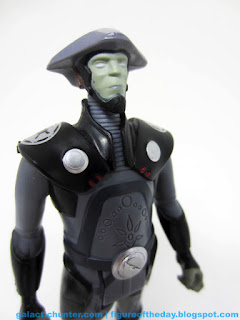 Bio: A towering presence, the Fifth Brother is tasked to hunt the Rebels by Darth Vader himself. A man of few words, he uses his intimidating physicality and brute strength to try and best the Rebel crew and capture the elusive Jedi.  (Taken from the figure's packaging.) 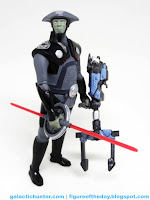 Commentary: When it comes to television, beggars can't be choosers.   Also, we're going to get into some spoilers real quick because I assume you've watched the show on which this guy is based.   OK?  Good.  The Fifth Brother is based on The Force Awakens concept art, and he seems to have been shellacked with a coat of whatever it was McQuarrie painted his designs with too - the smooth look has a lot of big blocks of color and he feels a lot less like someone who comes from the real world.   Han Solo actually wears pants and a shirt, this guy looks like some armor was stapled to a speed suit.  It's cool - but I don't think Space Nordstrom's carries whatever it is. 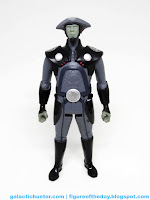 The big round hat feels like a holdover from The Clone Wars, and I have to admit I like it.  It's neat, it's distinctive - silly hats make the world a better place.  The Fifth Brother's shoulder armor sports massive silver Empire symbols, which seems a little goofy - but maybe it's a pride thing, patriotism or some such.   He's a big imposing guy, so he looks like he should be on board with whatever his job is that week.  Oh, that job was hunting Jedi - his actual name is something of a mystery but there were implications of rank.  Season one's Inquisitor was the Grand Inquisitor, and he died.   The Fifth Brother and Seventh Sister are his minions, which in drama seems like a bad choice on the part of the writing team.  If our heroes dispatched the main "not Vader" bad guy, these guys aren't necessarily a bigger threat.    It's like if they killed Kylo Ren and then they sent in Hux.  I'm sure Hux has a lot of troops to help him out, but he's probably not the best in a fight. But I digress. 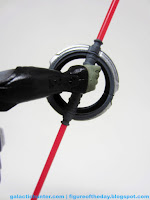 Hasbro decorated the figure with shiny black armor which turned out great, and captured most of the details from the animation model.  It helps the show's models are not nearly as ornate or wonderful as The Clone Wars, as they are generally simpler with less impressive textures.  This isn't a knock at the show - if you watched The Clone Wars in high-def you could see virtual brushstrokes on nearly everything.  Rebels is a lot smoother, so it wasn't too much to ask Hasbro to successfully include a few lights, a few silver things, and that pattern over his belly.  He can stand, sit, and grasp his disc-based double-lightsaber and claw weapon. 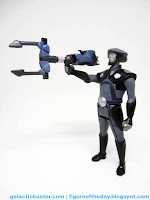 The claw weapon is how Hasbro grabbed a few extra pennies (or dollars) for this release - the "Combine!" weapon could connect with Admiral Ackbar's backpack and Tasu Leech's spare pistol to make some sort of a Power Loader-esque harness.   It has some metallic blue and silver deco, and no moving parts.   I dislike it because it looks fun, and isn't - if the claw could grip things, or close, I'd be enjoying it more.  One of my big sore spots right now is that Star Wars figures don't do much of anything interesting these days.   I don't need firing rockets or action features everywhere, but a few would be nice - or just drop non-show, un-Star Wars-y weapons and save me a dollar.  I promise I will make up for it by army building.  (Hey, I outfitted my Imperial Troop Transport.  I'm good for it.) 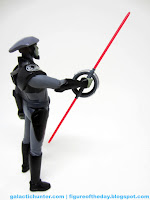 So, with a good face sculpt that matches the show (despite not showing a lot of emotion) the Fifth Brother is a worthwhile purchase if you see him.   As of right now I'd advise every fan worth his weight in plastic to pick up Star Wars Rebels figures, mostly because they don't seem shy about killing off some and changing the appearance of others.   Hasbro also doesn't keep them in circulation despite being on a weekly show, so kids that wanted Hera, Sabine, and a few others have been out of luck for nearly two years.  I don't believe Hasbro has a good reason to bring back the Fifth Brother, plus the Seventh Sister will be available within the next wave or two.   Get him while (and if) you can, they did a nice job bringing the design to life and I would say Hasbro made it about as good as we can expect in their current style.  The silver, black, and grey on the lightsaber hilt was a very nice touch.   I like it - I just wish the TV show had more toy support overall, especially between movies.  (During movie season, people are too distracted to want the TV stuff it seemed.)